Brainy Smurf fancies himself as the all-around-brain of the village. Although he acts as though he is second-in-command behind Papa Smurf, this is not the case and even Papa Smurf does not seem very fond of his sanctimonious attitude. In fact he could be considered as the class swot or know-it-all. He is a smurf that can be distinguished from the others because he wears thick glasses as he is extremely short-sighted. In fact, in the original Belgian version, he is called "Smurf with Glasses".

Brainy Smurf is an avid reader and keeps a lot of books in his house (mostly his quotations); his books are entitled "Quotations of Brainy Smurf," which contain Brainy's purported "folk wisdom." Few, if any Smurfs, read the books and are annoyed each time Brainy attempts to get his fellow Smurfs to read the books. Despite the dubious content of the books, at least once has "Quotations ..." saved the Smurfs. (This happened when an evil wizard captured the Smurfs and attempted to gain power by siphoning the knowledge out of books; Brainy let slip that the wizard needed to read his book, but when wizard discovered it contained nonsense and was quickly defeated.)

Fancying himself as being very close to Papa Smurf, he is sometimes self-centered and often lectures smurfs who don't behave and threatens to tattle on them to Papa Smurf. Loquacious, he often uses big words that he himself either made up or doesn't know what they really mean. A lot of the other smurfs dislike him (only Clumsy Smurf seems eager to go along, due to a general lack of a mind of his own), and when he enters into a long bout of lecturing, some frustrated smurf often angrily smashes him on the head with a big wooden mallet. Frequently, in the cartoon, after his blathering or posturing have gone too far, he is thrown a long distance (typically by Hefty Smurf) and always lands square on his head, usually outside of the village.

In the original comic books by Peyo Brainy has a very conformist personality, always sucking-up to the one who has the highest position around. In King Smurf, published in 1964, Papa Smurf left the village and another Smurf was declared the new leader, after winning an election in which Brainy was the only other candidate. Brainy started sucking-up to him (much like he did with Papa Smurf) but later joined a resistance movement as King Smurf's regime became more and more oppressive. Brainy was captured and jailed. A speech made earlier by a rebel leader led him to believe that being in prison made him a hero worth freeing, and he was rather annoyed when rescue failed to come. Things were restored to normal upon Papa Smurf's return.

In a story published in 1980, Hefty Smurf organised Olympic Games in order to make the other Smurfs fitter — the main prize and motivation being a kiss from Smurfette. Brainy was the self-appointed smurferee who constantly pestered the competitors with yellow cards as penalties. As part of his own training he would feign being hit by a mallet (Smurf knows he was used to it). While the athletes were cheered as they started the games, he was booed and heckled. Brainy got the last word, however: just as Smurfette was about to kiss the overall winner (Weakling Smurf), he offered her a pink card which delighted her.

In fact, there were some stories suggesting he would love to be in Papa Smurf's place (in one story, for example, when he found a magic egg which granted wishes, he wished to be Papa Smurf), which may suggest he would not have moral problems with usurping him one day.

Perhaps because he sees himself as Papa Smurf's successor, he is the only smurf aside from Papa smurf to try using magic (although in the comics there was Apprentice Smurf, and in the cartoons, Baby Smurf clearly possesses some sort of magical power), although he is considerably less talented.

On the frequent occasions when Papa Smurf leaves the village, Brainy typically declares himself to be in charge. Other Smurfs typically regard this claim as dubious, but often fall in line with his plans after Brainy wears them down with bluster and pseudo-knowledge. In the cartoon version, Brainy even declares himself King Smurf on one occasion.

On the plus side, there are times when Brainy's warnings to the other Smurfs should have been needed: in Le Voleur de Schtroumpfs ("The Smurfnapper"), published in 1959 and Le Jardin des Schtroumpfs ("The Garden of the Smurfs") in 1982, Smurfs fall into traps set by their enemy Gargamel after ignoring Brainy's warnings of caution. Fortunately he is able to warn the other Smurfs and they gang up, defeat the rotten sorcerer and free the prisoners. Brainy has good ideas from time to time. All in all, the other Smurfs generally like him but are annoyed by his know-it-all personality.

He was one of the cartoon characters featured in Cartoon All-Stars to the Rescue.

In all of Brainy's American-produced animated appearances, he is voiced by actor Danny Goldman, who also reprised the role of Brainy Smurf for a handful of recent appearances on the stop motion animated series Robot Chicken. Brainy Smurf appears in the English-dubbed version of the film The Smurfs and the Magic Flute, but no specific credit is given for the actor who voiced him. 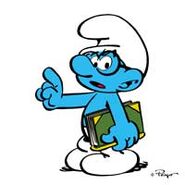 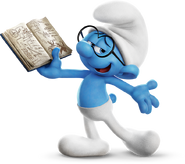 Add a photo to this gallery
Retrieved from "https://hero.fandom.com/wiki/Brainy_Smurf?oldid=1073797"
Community content is available under CC-BY-SA unless otherwise noted.