Preparing for the attack of the Bergens
singing and dancing and hugging, being with Poppy

Branch is the deuteragonist of the 2016 animated comedy film Trolls and it's sequel Trolls: World Tour, as well as the later series Trolls: The Beat Goes On! .

He was played by singer and actor Justin Timberlake, who also played Artie, Boo-Boo Bear and Will Salas, and in the series was played by Skylar Astin.

Branch is the overly cautious paranoid survivor in Troll Village, who lives in fear of the bergens invasion. The only troll in the village who doesn't sing, dance or hug, Branch lives a disgruntled existence, constantly trying to prepare for the worst. Even though he has secret feelings for Poppy, he is constantly flummoxed by the over-the-top positivity of the other Trolls.

Over the course of the film, Branch is challenged to embrace his inner Troll, even if it includes a dreaded burst of singing and dancing.

He has short, black hair and has greyish skin. He has dark lavender colored cheeks, and his eyes are a sky blue. He also has a large lavender colored nose. His ears stick out but sort of droop. He wears a dull colored, dark green leafy vest and dark brown shorts with dark green patches and stitches.

His true colors consist of having cyan skin, long straight indigo hair, a bright green leaf vest, light brown shorts with light green stitches and patches, bright sky blue eyes, a light purple nose, and sparkly bright rosy cheeks with slight glitter freckles. His colors turned grey after he lost his grandmother years ago, due to his singing. When all the Trolls lost their hope and turned grey, Branch regained his original colors by singing their hopes up, including his own, too.

Years before the events of the film, Branch was a happy Troll who lived with his grandmother in the Troll Tree. When singing one day, he attracted the attention of a Bergen who tried to grab him to eat. However, his grandmother pushed him out of the way and was taken instead. A traumatized Branch blamed himself, refusing to sing after that, his color turning grey in the process. Sometime after that, he escaped with the rest of the Trolls from Bergen Town.

Twenty years later, a paranoid Branch is invited to a party held by Princess Poppy and her friends The Snack Pack. He refuses, telling them that their party will attract the Bergens. His warnings are ignored, and he remains in his survival bunker throughout the party. His fears are realized when a banished Chef finds the village and snatches a number of Trolls. Poppy asks for his help to save her friends, but he refuses and chooses to stay in his bunker. However, he soon chooses to travel to Bergen Town with her after the other Trolls came to his bunker to hide (which became unbearable for him after the third Hug Time).

Upon arriving in Bergen Town, Branch agrees to help the other Trolls with getting scullery maid Bridget a date with King Gristle Jr.. At this point, he reveals to Poppy why he doesn't sing, to which Poppy comforts him. During the date, Branch feeds romantic lines to Bridget, presumably talking about Poppy at the same time. When the Trolls discover that one Troll named Creek (who was presumed to have been eaten by King Gristle) is alive, they steal the jewel that he is held in. However, they discover that it is empty, and are captured by Chef, where they discover that Creek has betrayed them to save himself. Creek returns to the village to lure the other Trolls out of hiding, where they are soon captured by Chef and her Bergen Cooks.

With all the Trolls captured and ready to be cooked, Branch watches as Poppy loses hope and turns grey along with the other Trolls. For the first time in twenty years, Branch sings, revealing to Poppy through song that he loves her, which she reciprocates. The song helps restore not only the color of Poppy and the other Trolls, but also Branch himself. The Trolls are then rescued by Bridget and reveal to King Gristle that Bridget was Lady Glitter Sparkles and say that Bergens doesn't have to eat Trolls to be happy. The King agrees to this and now the trolls and the Bergens are no longer enemies. Branch, Poppy and the other Trolls lead them with a song. Bergen Town turns colorful and the Troll Tree blooms once more.

At the end of the film, Branch shares a romantic hug with Poppy, who is crowned as the Trolls' new queen.

Trolls: The Beat Goes On

Branch as a child Branch with a paralized Poppy 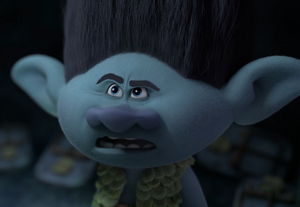 Branch in his secret bunker 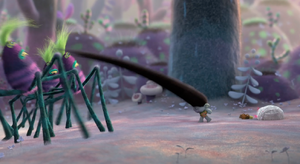 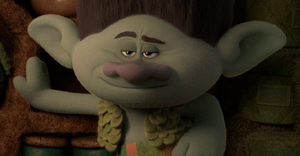 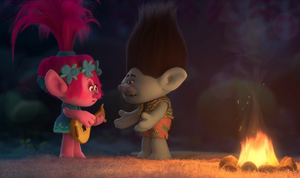 Branch, to Poppy, after Poppy's cover of "Hello Darkness my old Friend" 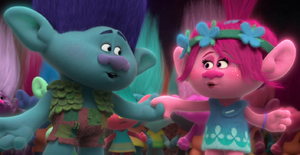 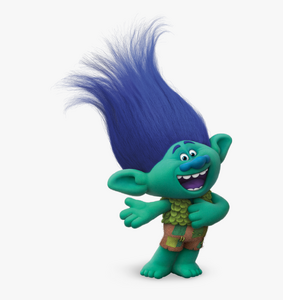 Branch with his colors restored 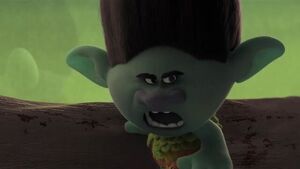