Playing around with Lucy Heartfilia

Pawn of a Villain, Anti-Heroic Pervert
Brandish μ is an anti-heroine from the anime and manga series Fairy Tail, is a former member of the Alvarez Empire and the Spriggan 12, the protection guard of Emperor Spriggan. She also leads her own team inside the Imperial Army, the Brandish Squad. Knowingly able to bring a nation to its knees, she garnered the epithet "Country Demolisher".

Brandish has been shown to have a very calm but waspish personality. She has stated that she dislikes troublesome affairs and has shown a desire to avoid conflict when possible, choosing to look at situations in a logical way, although as highlighted by Dimaria Yesta she occasionally can be quite irritable, moaning in annoyance or sighing in displeasure when it comes it to anyone, or anything she dislikes. She is without fear of death or torture, piquing her enemies to assassinate her while refusing to disclose any information of herself. When it comes to her soldiers or underlings, she has little affection or sympathy for them, carefree when ordering them around while justifying that she considers them her "pets", although mentioning she does take care of them if they correctly do her bidding. She lacks naivety, while showing she can be manipulative and deceptive when need be, as demonstrated when she deceived Lucy into undoing her restraints, ensnaring her once liberated. She apparently also like soft and fluffy things, as she was enamored by traveling on Happy once he was enlarged, hugging him in delight.

Her mother's death has affected her greatly and her misunderstanding that Layla is the perpetrator results in her desire to obtain revenge on the Heartfilias. Despite this, she regrets having to murder Lucy as a way of getting over her death, and sheds remorseful tears as she tries to go through with the act. After traveling to Star Memory with Aquarius and learning the real tragedy behind her mother's death, she reacts at her murder with horror. Unable to change the outcome these events, she collapses into a hysterical fit of tears, showing that even under her unflappable exterior she is also vulnerable to sadness when it comes to her loved ones.

Brandish can also be mischievous and playful at times. During their travels to find August, she joyfully used her Magic to make Natsu's head larger because he wanted it and shrinking Lucy's breasts as well as making them bigger. She also said that she has that strong urge to mess with Lucy. 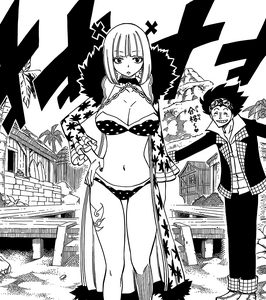 Retrieved from "https://hero.fandom.com/wiki/Brandish_μ?oldid=1981500"
Community content is available under CC-BY-SA unless otherwise noted.