Heart of the Freljord

Befriend Tryndamere to keep him in control (succeeded)

Braum, also known as the Heart of the Freljord, is a playable champion in the MOBA game League of Legends, and one of the main protagonists of The Ruined King.

An Iceborn hero with a big heart, Braum is a muscular Frejlordian folk hero who roams the region doing good deeds, protecting the vulnerable behind his mighty shield in hopes of creating a peaceful Freljord.

The 119th champion added to the game, Braum was released on May 12th, 2014, and is most commonly played as a support.

He is voiced by Jean-Benoît "J.B." Blanc.

As a child, Braum was larger than other Freljordian youths. His mother taught him not to use his size to intimidate or bully, and true courage was not about dominating, but helping those in need. One day, an enemy tribe was attacked by ice giants and Braum's mother did not hesitate to help them. Braum was confused why she would help the enemy at first, but thanks to her kindness, said tribe became allies. Braum understood his mother's philosophy that all of the Freljord was a family, and he pledged to bring that family together. Braum helped people in his home town, by saving them from danger and bringing hope wherever he went.

Eventually, he realized that he was needed in more places than his home, so he bid his mother a tearful farewell as he went off on his quest. His heroism and good deeds inspired people all over the Freljord to tell stories about his feats, but some were unrealistic and exaggerated. One myth told that Braum's signature shield was an indestructible vault door made by the demigod Ornn, which he broke from its hinges by punching the rocks surrounding it in order to save a troll boy trapped within. Braum laughed heartily at the stories he'd heard about himself, but rather than refuting them, he embraces them, as he won't let the truth get in the way of inspiring others.

Braum later travelled to Rakelstake to hear the words of Ashe, a leader of the Avarosan, a tribe who followed the teachings Avarosa of the Three Sisters, whom Ashe is said to be the reincarnation of. There he also met Tryndamere, a barbarian who was determined to prove his worth by dominating every opponent he could face. In one duel, Tryndamere became increasingly lost in his fury and was actually about to kill his opponent, but Braum intervened by holding up his shield, and Tryndamere kept attacking the impenetrable shield until his rage subsided. After that, they became good friends, and it is even said that Braum was the one who introduced Tryndamere to Ashe, and the two later married.

Braum has no specific allegiance, as he believes that all within the Freljord are brothers and sisters. He is reliant on Ashe as they both share a goal to unite the region, and the Avarosans have adopted him as their own. He often tells adoring children that he wishes for the Frejlord to settle their differences and then retire to become a poro herder.

Braum sees no-one as an enemy of his. However, the Frostguard, led by Lissandra, are hunting for him and he does not understand what they want from him. Still, he has fought against the Frostguard's forces numerous times in order to defend innocents threatened by them.

Braum is one of the playable characters of Ruined King: A League of Legends Story, having travelled to Bilgewater to join several other champions to stop the Ruined King.

Braum is a selfless, friendly man who enjoys helping people, simply because he likes being altruistic and hopes that his actions will inspire others. Ever since witnessing his mother's act of kindness on a neighboring tribe despite being enemies, he has taken his mother's teachings to heart and sees worth in all of the population of the Freljord, calling them all a family of brothers and sisters, and is able to make friends with anyone no matter how threatening they are as shown with Tryndamere. Braum's feats have inspired many myths, but Braum himself accepts the stories about himself no matter how inaccurate they may be, since he knows that people will be inspired to acts of generosity and kindness after his example. 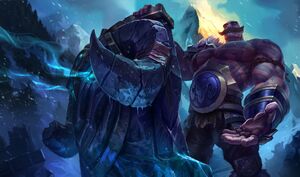 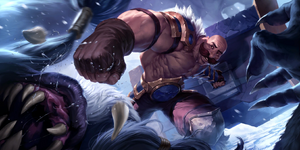 Braum as he appears in Legends of Runeterra. 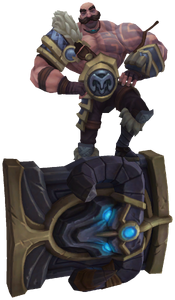