To bring peace and justice to New Texas

Protector of the innocent

Marshal BraveStarr is the main protagonist in the space western series BraveStarr and it's pilot film. He is the Native American space-western Marshal who is the law enforcer of the planet New Texas.

BraveStarr can call upon the power of "spirit animals", enabling him briefly to perform superhuman feats, these were as follows:

In addition to his animal powers, he has electronic equipment such as a computerized visor and a two-way radio. BraveStarr also carries a "Neutra-Laser" pistol and a "Trans-freezer" rifle, and the badge on his uniform can shield him at need.

BraveStarr has strong morals in abiding by the law and prefers to use more peaceful methods when dealing with problems, so he often consults the Shaman for advice. After every adventure, he or someone else often learns an important lesson which he then reviews to the viewers at the end of every episode.

BraveStarr works with Thirty/Thirty an equestdroid horse and Prairie resident Deputy Fuzz, though he sometimes has J.B., Shaman and other residents of New Texas to sometimes help him. 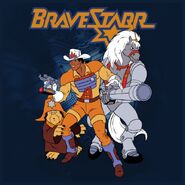 Bravestarr with Deputy Fuzz (left) and Thirty/Thirty (right)
Add a photo to this gallery
Retrieved from "https://hero.fandom.com/wiki/BraveStarr?oldid=1773646"
Community content is available under CC-BY-SA unless otherwise noted.