Revenge of the Fallen (video game)

Protect Earth from the Decepticons

Breakaway is an Autobot fighter jet, who appears in the Revenge of the Fallen and Dark of the Moon video game, and a minor character in IDW Publishing's Transformers Movie comics.

In an army dominated by the ground bound, Breakaway stands out as an Autobot with flight capabilities. Not only that, but in a straight line, there aren't many fliers that keep up with him. In battle he uses this to his advantage, dispensing with any aerial acrobatics, and simply relying on bombing runs at supersonic speeds to get the job done.

Revenge of the Fallen

Note: The Revenge of the Fallen video game serves as an alternative version of the movie, so is not in continuity with the main film series.

As a new arrival, and the Autobots sole flier, he and Bumblebee were trained by Ironhide, in Sam Witwicky's hometown, Tranquility.

When the Decepticons moved to resurrect Megatron using an AllSpark shard, Breakaway was the sole Autobot able to assist the besieged United States Navy fleet guarding the area. Following his arrival, he began fixing their anti-aircraft guns to dispose of the Seeker forces attacking the ships, fighting off the Constructicon's drones. Once the guns were repaired, Breakaway rescued several injured sailors, and evacuated to their medical centre in the radar statios. However, the Constructicons managed to reactivate Megatron.

After Sam Witwicky left for Egypt with Jetfire, the Decepticons launched a cloaked probe to locate the boy. Breakaway was dispatched to track down and destroy the probe. He succeeded, but discovered that there was a second probe cloaked by the first. Breakaway managed to destroy the probe before it could pick up Sam's trail.

When NEST learned of several strange spark traces near a ruined Kingdom Petrochemicals plant in Florida, Breakaway was sent to scout ahead for his grounded partners. While he found no sign of Decepticons on site, there was some human military activity. Bumblebee ordered him to merely observe and not engage. After Soundwave arrived, Breakaway immediately went on the offensive against the airborne Decepticon, told him he to leave him. When Breakaway refused, Soundwave returned fire with his sonic cannons, blowing up and killing Breakaway.

Note: This game serves as a prequel to Dark of the Moon, but is not in continuity to the IDW comics.

Breakaway was among the Aerialbots assigned to protect Stratosphere, who was carrying MechTech for safekeeping. When Starscream attacked him, and proved to dangerous, Breakaway, Silverbolt, and Air Raid exited Stratosphere's cargo area to battle Starscream. Unfortunately, after a lengthy dogfight, all three Aerialbots were defeated. 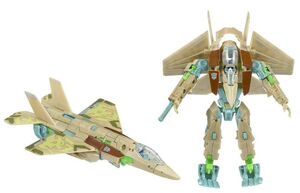 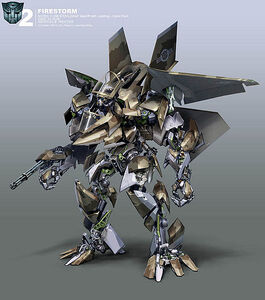