Kid
Rival
Brendan (Japanese: ユウキ Yūki) is the male choice for the player character in Pokémon Ruby, Sapphire, and Emerald and their Generation VI remakes Omega Ruby and Alpha Sapphire. He also serves as the rival in the same games if the player chooses to play as the female character. His female counterpart is May.

Brendan is a slightly tall for his age, thin boy with dark brown hair which is covered by a white beanie and pale skin. His eyes are brown in R/S/E and pale blue in OR/AS.

In the Generation III games, he wears a black headband with a red Poké Ball pattern. He sports a long-sleeved red and black sweater and black shorts over baggy black trousers with yellow cuffs at the bottom. His sneakers are also red and black, matching his outfit. Around his neck he sports a gold band with a round white circle in the center, and on his hands he wears yellow and blue fingerless gloves.

In Emerald, his clothes have some green patches. He now wears a black and orange collared short sleeved shirt with a green backpack, orange fingerless gloves with black and green wristbands, a green headband, dark gray slim-fit long pants underneath with black and gray shorts, orange and green slip on running shoes with black soles and white stripes.

His appearance changes slightly in Omega Ruby and Alpha Sapphire, but has a somewhat similar colour scheme to R/S. The style of his beanie is slightly different than it looked in the previous games, and he has grown his sideburns out, making them more prominent. He wears a skin-tight red and black t-shirt (with an odd zipper on the collar) and black and dark grey slim fit knee length shorts. He wears a green backpack and white and green slip on sneakers without socks. He has a Mega Bracelet on his left wrist. He now wears a black headband with a thin scarlet semi-circle.

Brendan is the son of Norman, the fifth Gym Leader in Hoenn and the Gym Leader in Petalburg City. He was born in Olivine City in the Johto Region, and moved to Littleroot Town in the Hoenn Region, where he met and befriended May, the daughter of Professor Birch who becomes his rival.

In Emerald, he has to stop both Team Aqua and Team Magma from destroying Hoenn and the world.

As a rival, Brendan is a kind-hearted, friendly, and humble person. He is kind and respectful to the player and is a good trainer to his Pokémon.

Brendan appears in the openings of some of the movies, his first appearance being in Jirachi: Wish Maker, battling against a Solrock and Manectric, while using his Aggron and Shiftry. He then reappears in Pokémon Ranger and the Temple of the Sea, battling Rebecca's Tyranitar with Swampert. And finally reappears again battling against Lucas's Magmortar with Rhyperior.

There is a short cameo appearance of them battling in the beginning scenes of Giratina and the Sky Warrior.

Brendan's counterpart in the manga is Ruby, who is the son of Norman, a Pokémon Coordinator and a friend of Sapphire, the daughter of Prof. Birch. He serves as the male protagonist in the Ruby & Sapphire arc. He was born in Goldenrod City in the Johto Region and moved to Littleroot Town in the Hoenn Region.

Ruby, with Sapphire, later appears in the Emerald arc, and later in the OmegaRuby & AlphaSapphire arc. 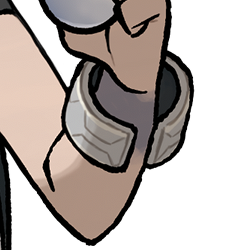 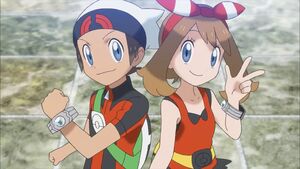 Brendan and May in the animated trailer 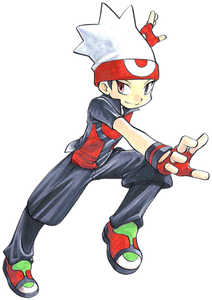 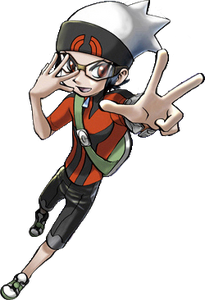 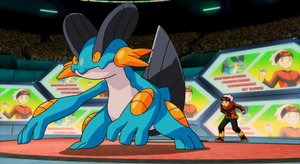