To become the most champion in Gormball game

Ursula the Usul, Gargarox, and others.

Brian the Scorchio is shown to be very protective, but despite his intimidating behavior, he is a male dragon with a anti-heroic personality used to do good, Brian is known to be an protagonist if you pick him, he has never known his parents when he was a baby, Brian was later raised by Gargarox, a mutant Grundo who feeds him with alien foods to make him a good Gormball player, Brian later befriends Kevin, a Korbat who dreams to become a champion of Gormball just like him. 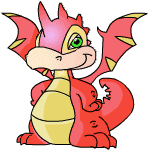 Add a photo to this gallery
Retrieved from "https://hero.fandom.com/wiki/Brian_the_Scorchio?oldid=973062"
Community content is available under CC-BY-SA unless otherwise noted.