Brick McArthur, labeled The Cadet, is a major supporting character in Total Drama: Revenge of the Island.

He was voiced by Jon Cor.

Brick is introduced in Bigger! Badder! Brutal-er! along with the other twelve new contestants. He quickly shows his cadet background and salutes as he is introduced by Chris. He then races Jo to the shore, losing to her and coming in third (behind Jo and Dawn). In the race to appoint the teams, he arrives fourth and is put on Team B, later dubbed the Mutant Maggots. Afterward, during the first challenge of the season, Brick attempts to use the trampoline gained by his team and an axe to chop down the Maggots' totem pole, but is unsuccessful once the axe gets stuck to the totem and doesn't let go. While hanging from the totem, a squirrel, mutated by the radioactivity of Camp Wawanakwa, begins shooting lasers at Brick through its eyes, but Brick is able to dodge them. A laser beam from the squirrel eventually cuts down the rope that is holding the Maggots' totem pole, also knocking Brick back down to the ground. Although Brick lets out a happy "mission accomplished", he quickly gets smashed once the totem pole falls on him. The Mutant Maggots later go on to win the challenge, leaving Brick safe for another episode.

In Truth or Laser Shark, Brick supposedly wakes up early for a morning jog. He reveals in a confessional that he believes Jo is his biggest competition, but is glad to have her on the Mutant Maggots. During his jog, he ends up running into Jo and they try to one-up each other as they argue about how much they ran, and how they ran it. After a brief argument, Jo says that both of them were the cause of their team winning the first challenge. However, she later reveals in the confessional that she just said that so Brick stayed loyal until she was able to eliminate him. During the "getting to know you trivia game", it is revealed that Brick wet his pants on his first and last day of school. Later, during the "Mad Skills Obstacle Course" relay race, Brick is up against Dawn in the second part of the challenge. Due to the glasses that he was wearing, however, he kept on running into the same post several times and was later hit with a cannonball in the face. After a while, Brick is able to give Jo his team's mascot (which he mistakes for a cat), allowing her to begin her part of the race. Due to his team winning the challenge thanks to Cameron, Brick is kept safe from elimination.

In Ice Ice Baby, Brick is first shown having a race with Jo to see who can eat their breakfast the fastest. However, he gets his spoon lodged into his throat, so Jo has to punch his back to force it out of him, shooting it at Mike, causing him to switch into Chester. During the "Mountain Climbing" challenge, while Jo and Brick are racing to the top of the mountain, Brick attempts to show how he can dislocate his hip, but ends up dislocating his arm instead. Jo asks when he learned to do that which he replies with "just now". Once Chef begins throwing ice cubes from the top of the mountain, Brick is struck in the head while biting on a pipe to do his dislocated arm's work. Once he makes it to the top, Anne Maria soon follows, who accidentally punches him, in an effort to punch Jo, off of the mountain, relocating his arm and dislocating the other one. Later, in the second challenge, Mike accidentally hurts Brick's arm after seeing they got the better castle fort. Jo and Brick then have a thumb war to decide team captain, in which Jo wins. Brick comments that he's never met a woman stronger than him, and that not even his mother was stronger than he was. As team captain, Jo commands Brick, Zoey, and Anne Maria to take the Toxic Rats' flag. While under a barrage of snowballs, Brick decides to exploit Anne Maria's hard-as-steel hair to deflect snowballs. They succeed in entering the other fort, arriving as Mike (AKA Vito) captures the flag. Brick then joked that Mike won best actor, and attempted to take the flag, in which Vito denied. After they tussle with Scott, the Maggots soon win the challenge when Scott sabotages his team.

Brick confesses to being afraid of the dark in a confessional early on in Finders Creepers, ever since the day he was born. It's not just being in the dark, but the noises that come out of it. The lights in the confessional then go off, and Brick screams and possibly wets himself. When Zoey is kidnapped, his first instinct is to go find her with Mike, but Jo convinces him to count her as a casualty despite the penalty Chris warned them about. In the first part of the chapter, he wets himself, which he tries to pass off as falling in a puddle. He goes to clean it off and gets kidnapped by the spider. Later, he is seen tied up on the web and is freed when Svetlana bounces off him. He promises to go to help the rest of them, but Jo orders him to get the hook and win. Being the military fan that he is, he follows the command and makes it to the finish line before the Toxic Rats, after possibly peeing himself again. He protests when he learns that the Rats win, instead; having lost five teammates, he is penalized more than the Rats who only lost two teammates. Thus, at the elimination ceremony, he volunteers to be voted off instead of waiting for the vote. Chris informs him, however, that he is switching teams, instead. Brick is quite happy to learn that he won't be leaving.

Brick has a rough start with his new team in Backstabbers Ahoy!. He wakes them up too early, and his alarm clock annoys his new team. He did however have a friendly moment with Dawn and tries to help her in collecting garbage. Dawn tells him that he doesn't need to help her just because he was teased a lot as a child, thus resulting in his need to be dominated, which Brick denies. Brick is chosen to retrieve the underwater skies, against Jo. In the water, he is confronted by Fang, who mercilessly toys with him, bouncing him back and forth. However, he eventually manages to break free, and retrieve the skis for his team. He is later chosen to water-ski alongside Dawn, and Sam, but lose because of Scott's sabotage. He is later shocked to find out that Dawn was allegedly stealing their possessions, unaware that this was a lie planted by Scott to frame her, although Brick was his original target. Brick was the first to receive a marshmallow that night.

In Runaway Model, Brick assembles the Scott and Lightning and dubbed themselves Team Men as their team consists only male members. He then pokes fun at Sam's thumb with the rest of the Toxic Rats. During the challenge, Brick comes up with a way to capture Sasquatchanakwa by creating a bomb in his bag that will dress it in military when thrown. He disregards Sam's advice to give it style, but changes it to Dakota's suggestion instead. Later, while saving Lindsay, he throws another bomb, dressing the creature into little kid's clothing. In the confessional, he states he'll stay away from fashion and begins crying. He then assists Scott and Lightning into climbing the scaffolding, but gets hit by a barrel. He is taunted at the elimination ceremony for his failures by Chris. Sam is eliminated, which allows Scott to leave to the Maggots and Jo to join the Rats. He politely welcomes her and welcomes her to the team, to which she claims that it is now her team.

Brick is shown to stick with his personal morals and rules in A Mine Is a Terrible Thing to Waste. At the beginning of the episode, he was shown lifting a log and later, met up with Jo. He decided to become the leader of the group and told Jo that if she doesn't do what he says, she would be the next person to go home. After Jo called him major drippy he created rules that she would have to follow or else she will be eliminated. When they arrived at the abandoned mine, Brick asked Chris if it was well lit in the tunnel due to his fear of the dark. After sliding down the rope, Lightning bumped into Brick which caused him to let go of his team's light source, a glass jar filled with fireflies. Lightning and Jo attend to go on ahead without him and to catch the fireflies back, leaving Brick alone and lost in the dark. He then encountered a giant radioactive mutant gopher once he turned on the flashlight. He started chasing the rat with his boot due to it's bad stench and met up with the group. Jo scolds him for leaving his team behind. They were captured by the rat under their feet. He noticed that Mike, Zoey, and Cameron needed help in fending off the rats. He decided to help by knocking the rat out with the Gilded Chris Award. This caused his team to lose, and Brick to be eliminated after getting votes from Jo, and Lightning. As he takes the Hurl of Shame, he is saluted by his friends Mike, Cameron, and Zoey, and is then thrown alongside Anne Maria from the island.

In Grand Chef Auto, it is shown that he left a pair of his boots somewhere at Camp Wawanakwa.

Brick returns for the finale in Brain vs. Brawn: The Ultimate Showdown and roots for Cameron to win. When the mutant animals went on a rampage, Brick, along with Staci, Jo, Mike and Zoey, were attacked by Larry until Cameron saves them. After Cameron won and announce that he is going to share his winnings with everybody, Brick happily announce that he can finally go to fashion school, much to the other contestants' surprise. Later, he along with others laugh at Chris after he was arrested by the feds. 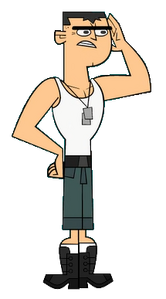 Brick in his swimsuit. 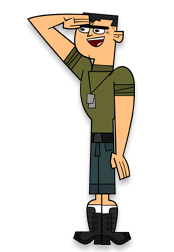 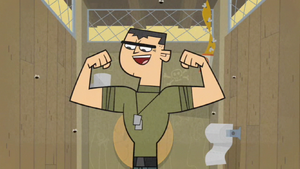 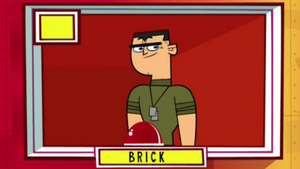 Brick appears in Skatoony in the episode Vikings. 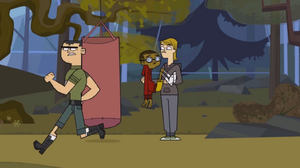 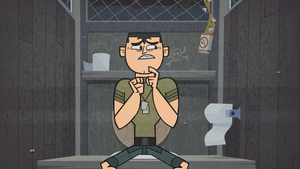 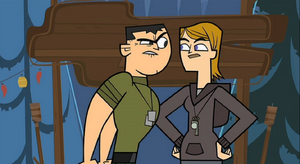 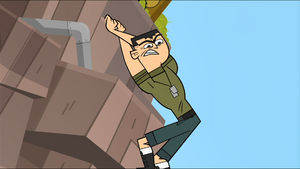 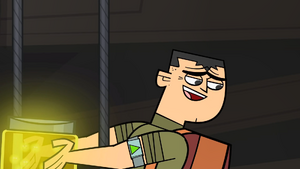 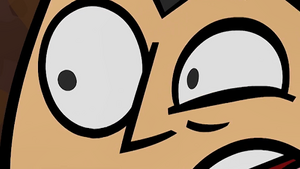 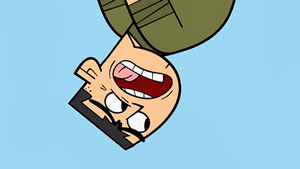 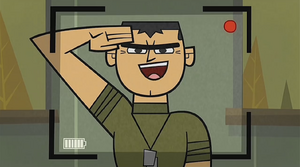 Brick asks for permission to explain why he's worthy of Total Drama. 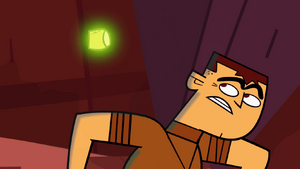 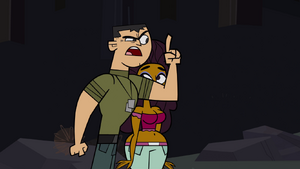 Brick refuses to leave a teammate behind. 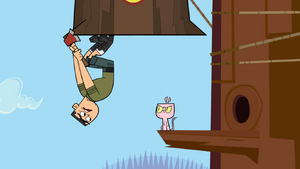 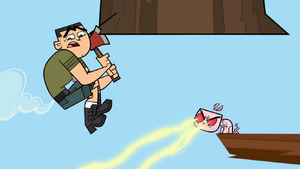 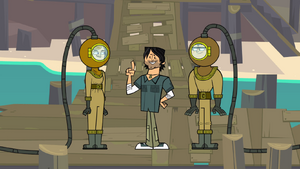 Brick and Jo prepare to start the challenge... 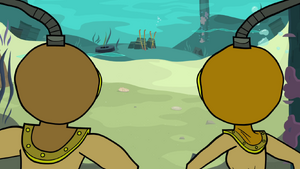 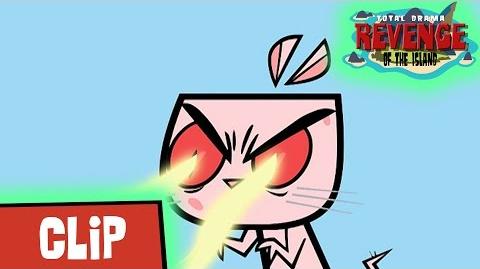 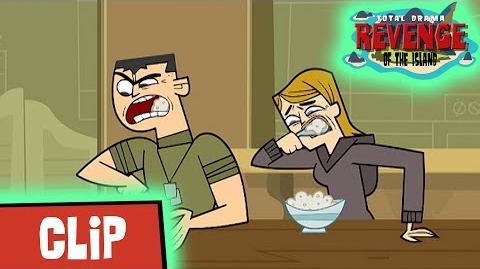 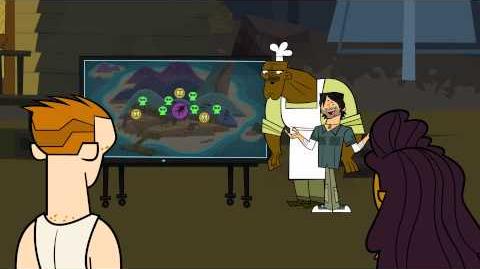 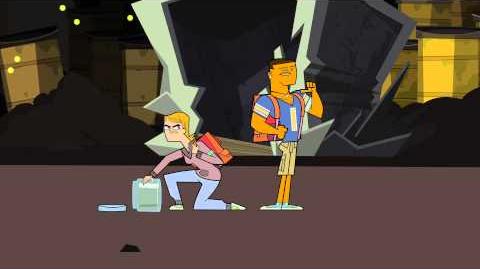 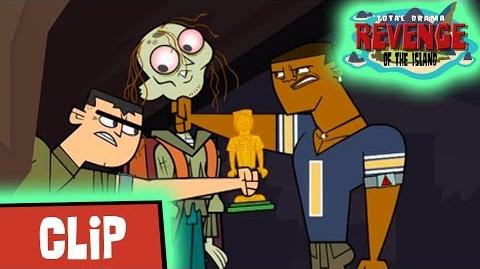