Bridget is the tritagonist of An American Tail. She is a good friend of Fievel, and the de facto girlfriend of Tony. She is a major member of a rally of mice to rid New York of an army of cats, led by the deceitful Warren T. Rat.

Bridget is a mouse rights activist of Irish decent. Her parents were killed by cats in 1884, whether she was in Ireland or New York at the time is unknown. But this incident is likely what led to her becoming an activist against the unfair mistreatment mice suffered from at the hands of the cats of New York. She is first seen giving a speech in a back alley, imploring any mouse listening to get together and do something about the cats. It's about then that she met Tony. She seems to be just as attracted to Tony at first sight as he is to her.

She also takes an immediate liking to Fievel who was separated from his family after he was washed overboard by a wave that look like a monster, and agrees at once to help him, bringing them both to Tammany Hall. This is fruitless however, because Fievel's family was new to America and Honest John didn't know them yet and she informed him that Fievel's family has got out their boat. It is evident that Bridget, being politically active, knows people in high places. She sits on stage at Gussie Mausheimer's rally and was possibly one of the key figures in the building of the Giant Mouse of Minsk.

She lives in a water tower atop a downtown building, and lets Fievel stay with her while he searches for his family, likely acting as his caretaker along with Tony between the scenes. She disappears for the third and fourth movies, it is never explained where she went. Her absence is one of the canonical changes in the third movie which lead some people to dislike it.

She appears alongside Tony in a few cameos in Fievel Goes West, always with a child in her arms. It can be assumed that she and Tony have started a family by then, and moved to Green River. 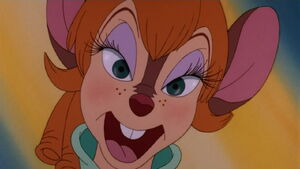 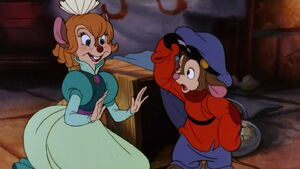 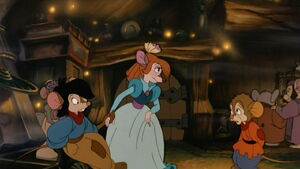