Notice: This character has been confirmed to be male. He is not to be in the female category.

Bridget is a character in the Guilty Gear fighting game series.

Bridget has a feminine figure with female curves and slender arms and legs. He has blonde hair and wide emerald green eyes. Bridget appears to sport the attire of a nun. He wears a sleeveless blue dress with white hemlines as well as a Bandeau (a strapless piece of cloth that covers the neck or cheeks, which used to be traditionally worn by Catholic nuns) fastened with a bow. He also wears a blue veil with a metal headband, the patterns of a cross is also visible on the veil. He also wears shoes that compliment the colors of his outfit.

What resembles a handcuff; possibly made of metal hangs around his waist, with latches and a keyhole.

Bridget is kind and understanding, and in many instances throughout his stories, he befriends or is befriended by the other characters (such as by Dizzy, Potemkin and May. He even politely asks for their permission before engaging them in a fight. He also has a trait to showcase his skill to others. Bridget shows strong determination and a straight-forward viewpoint when it comes to proving himself to be a man in Guilty Gear XX, preferring to correct others when they mistake him for a girl. It can be argued that his personality presents a child-like innocence in the game. Despite being a bounty hunter, the rest of the characters never see him as a serious threat, often regarding him as a disturbance.

Despite the name and appearance, Bridget is actually male. He was born in a village in England where the birth of twins of the same gender was considered bad luck, and hence his family named and raised him as a girl (against his wishes). When he became older, he decided that he would prove his worth and his masculinity by becoming a bounty hunter. He is given a fake list of bounties by I-No, sending him against many of the other fighters.

Bridget sets off to catch the bounty, defeating many characters in the process. In the first ending, Ky reveals to him that the bounties are false, and pays him a lot of money for his troubles. In the second ending, Bridget befriends the Jellyfish Pirates, but after a long fight with Dizzy she asks him if he'll be her friend since she doesn't have much friends on land. Then he accepts her friendship. In the third ending, Johnny was tricked into thinking Bridget is a girl, and tries to seduce him. After realizing Bridget's true gender, he was very embarrassed and told Bridget not to tell anyone.

Bridget has proven his masculinity and leaves the bounty hunter life. His new ambition is working as an entertainer, trying to recruit Venom for his pool abilities, and I-No for being an awesome guitar player; however, both attempts fail. In his ending, he begins working as a waiter in Jam's restaurant. Also, in an alternate ending, he returns to his native village, only to find that his twin brother has disappeared, and something has happened to his mother and father (according to Bridget's Uncle). His new quest is looking for his brother.

Bridget continues bounty hunting, and it is revealed that his next mark is no other than Testament. Soon after apparently apprehending him, Bridget has a few run ins with the rest of the Guilty Gear cast, to show off his masculinity and just being in the wrong place at the wrong time. Bridget meets Gig and mistakes it for a party goer in a costume. Gig attacks, and Bridget is forced to fight back. After defeating Gig, Bridget questions if Gig has a bounty on its head, but after asking Gig and assuming no bounty is put, Bridget says goodbye to the dying gear. In his ending, Bridget is travelling down a road realizing he is running out of money and food. In his dilemma he spots a rather burly, thuggish looking man and asks him whether or not he has a bounty on his head.

Bridget is one of the best characters playable for versatility, but is not recommended for beginners. Bridget's unique Yo Yo Extend move will allow a player to access Roger; this way, Bridget can attack from left and right by himself and with Roger. While using any move that involves Roger, timing and position of the Yo Yo are key factors; since Roger is relatively slow in movement, it can be avoided easily, being the most effective only when the opponent is positioned near the Yo Yo. Bridget's rushdown attacks are simple to pull off (one of the best in-game), including Starship, as the move can deliver a good combo even during a Roger summon, can be used in midair, and is excellent for putting pressure on opponents. Bridget's Overdrives are hard to pull off and do large amounts of damage, but even these depend on the timing as well. Me and My Killing Machine is one of the best Overdrives that can act as an anti-air move, and can be used in almost any position of the screen (depending on the placement of the Yo Yo) and Tragedy Maintenance delivers good damage, but is largely air based. 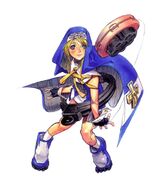 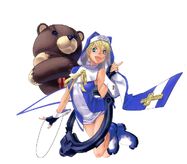 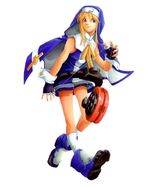 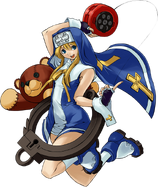 Retrieved from "https://hero.fandom.com/wiki/Bridget_(Guilty_Gear)?oldid=1882793"
Community content is available under CC-BY-SA unless otherwise noted.