Animal Hero
Bright Heart Raccoon is the raccoon from Care Bears and one of the cousins from the Forest of Feelings.

He was voiced by Walker Boone (1985), late Billie Mae Richards (1986, who also voiced Rudolph and Tenderheart), Jim Henshaw in movies and Ryan Wiesbrock in Care Bears and Cousins.

He has alternating light and dark purple fur and his belly symbol is a yellow heart-shaped light bulb.

He is the smartest of the Cousins, Bright Heart is a highly intelligent thinker and inventor who relies on logic and reasoning to solve problems. He is sometimes paired with Grumpy Bear, who shares a similar talent for handiwork, with the two pooling their resources to create inventions. 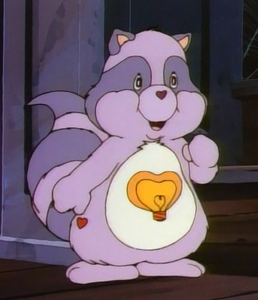 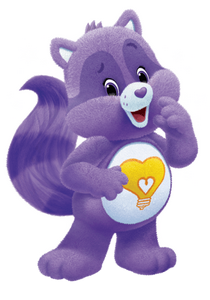