Brigitte Lindholm is one of the main protagonists and playable characters in the video game Overwatch. She is a skilled metalsmith and mechanic, who accompanies Reinhardt as he wanders across Europe. She is the youngest daughter of Torbjörn and his wife Ingrid. She is also a supporting character in the animated short "Honor and Glory", and one of the main protagonists of the animated short "Zero Hour".

She is voiced by Matilda Smedius.

No longer sitting on the sidelines, Brigitte Lindholm has taken up arms to defend those in need of protection.

The youngest daughter of weapons designer, Torbjörn Lindholm, Brigitte was the first of his children to show an interest in mechanical engineering. Brigitte spent much of her spare time in her father's workshop, learning the trade and honing her skills. Her aptitude for engineering mirrored that of her father's, but Brigitte's primary interest was in armor fabrication and defensive systems, unlike Torbjörn, who was world renowned (and perhaps infamous) for the weapons he created.

Everyone expected that Brigitte would continue her apprenticeship and follow in her father's footsteps. But her plans changed due to influence of another prominent figure in her life, her father's close friend and fellow Overwatch agent, Reinhardt Wilhelm. A close friend of the family and Brigitte's godfather, Reinhardt told Brigitte tales of heroes and chivalry as she grew up. After his retirement and Overwatch's fall, Reinhardt declared that he would become a knight-errant on a quest to bring justice. Before he left on his adventures, Brigitte surprised him by asking to join him as his squire. Reinhardt accepted.

As a squire, Brigitte had many responsibilities, the most important of which was the upkeep of Reinhardt's Crusardar armor (a design she was familiar with as the current version was designed by her father). But more and more, she found her main job was taking care of Reinhardt himself, trying to protect him from his overenthusiasm even as his body was breaking down from years of combat.

Eventually, she realized that serving only as a mechanic wasn't enough, and that the best way she could aid Reinhardt was to become a warrior in her own right. While Reinhardt trained her in combat, Brigitte began to build her own suit of armor in secret.

Now Brigitte fights at Reinhardt's side to protect him, and any others in need as knight and squire journey to make the world a better place, one battle at a time. 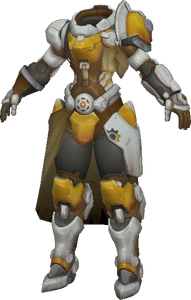