Heroic Monster
Comic Relief
Brute
Broadway is one of the main protagonists of Gargoyles.

He is voiced by Bill Fagerbakke, who later voices Patrick Star in SpongeBob SquarePants.

He is a large, round, and bluish green-skinned gargoyle.

He is a jolly and occasionally naive clan member with a fondness for food (even using food as a weapon on some occasions), as well as Westerns and detective movies. He is named after the famous Manhattan street known for its prominence of the American theater industry. He has the largest wings of all the group and has small bat wing-like structures as his ears. He is loyal, reliable, friendly and quite intelligent despite his appearance, and was the main focus of several of the show's more thought-provoking episodes.

Like the other gargoyles, he survived the 994 slaughter and was cursed to sleep as a statue for a thousand years. In the modern world, Broadway developed fast likings for Western and detective movies and cooking. He also made fast friends with the NYPD detective, Elisa Maza, possibly to a greater extent than any of the other gargoyles except Goliath.

Broadway was the star of the episode "Deadly Force", a somewhat controversial episode that was not aired on television for a long period. In it, Broadway finds Elisa's gun and imitates gunslingers that he had seen in a Western movie. In the process, he accidentally shoots and seriously wounds Elisa. Though she survives, and bears him no ill will for his actions, they both learn a valuable lesson about gun safety. Broadway takes it upon himself to destroy any firearm he finds, and Elisa learns to keep her weapon properly secured. In fact, the episode seemed to only bring the two closer together, and later Broadway was often seen aiding Elisa in her police cases serving as her unofficial "partner" using skills he picked up watching detective movies. Broadway seems to have been the gargoyle of choice for writers who intended to ground their stories in the real world, because of his down-to-Earth nature. Several stories featuring human criminals had only Broadway (and leader Goliath) in pivotal roles.

Broadway also appeared in a main role during the pro-literacy episode "Lighthouse in a Sea of Time", in which both he and Hudson (both previously illiterate) come to realise the value of the written word. After this in subsequent episodes, the gargoyles diligently struggle to master reading. Along the way, Broadway discovers a taste for poetry and the dramatic arts, particularly Shakespeare, as he is seen reading from Romeo and Juliet in the final canon broadcast episode of the series.

Following Goliath's return at the end of the Avalon World Tour, Broadway began courting Angela, Goliath's newly discovered daughter, as did Brooklyn and Lexington. After she expressed her frustration with them, Angela ultimately chose-Broadway, as he saw her as the person she was, rather than simply an object to be won. Likely this was helped by the episode "Possession", in which they were briefly possessed by two of the personalities that made up the gargoyle Coldstone, two lovers that are called Othello and Desdemona. 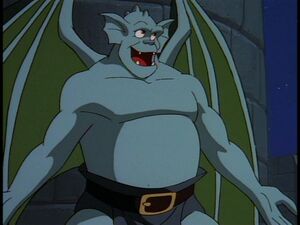 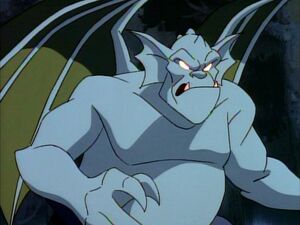 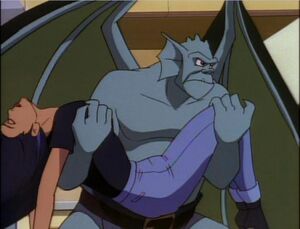