Brock Samson is the tritagonist of the Adult Swim original animated series The Ventures Brothers. Brock is very well known as a professional killing machine and starts off acting as a bodyguard for the Venture twins and their father, Rusty Venture until he works with Sphinx and replaced by the former super-villain, Sgt. Hatred.

Brock Samson joined the U.S. military shortly after accidentally killing a team-mate in college in order to find purpose in his life. Brock became a natural solider and by his early 20s was given to an eccentric military colonel named Hunter Gathers. Col. Hunter Gathers, became convinced Brock had what it took to be part of America's elite and asked Brock if he could truly handle the weird and crazy life of a special agent. Brock dutifully agreed, the first lesson Gathers taught Brock was never to trust anybody and promptly assaulted him. However with Brock still holding firm to his desire to join and was welcomed to the O.S.I. (Office of Secret Intelligence).

Brock's training with Col. Hunter Gathers would see him pursuing the the rogue criminal organization, the Guild of Calamitous Intent. While the rest of the O.S.I. was focused on the terrorists of SPHINX Col. Hunter Gathers and agent Samson were chasing the Guild who they believed invisibly orchestrated super-villainy around the globe. Col. Hunter Gathers and Brock were seen as a laugh stock by the other agents and eventually Gathers was ordered by an sergeant. Brock was to be disciplined for helping Gathers against O.S.I. by being sent to guard a low priory O.S.I. concern, Dr. Thaddeus "Rusty" Venture. Dr. Venture was a sight concern because he was the son of previous super-scientist, Dr. Jonas Venture, and had access to his fathers impressive and potentially dangerous research but was morally questionable enough to be a potential security risk. Even with the technology at his hands Venture was a low priory threat and so the assignment was meant as a punishment for Brock, a place to waste his talents. In truth the sergeant who punished Brock and Col. Hunter Gathers was a undercover agent of the Guild of Calamitis Intent and would later go on to be known as Sergent Hatred.

Brock spent years as doctor Venture' body-guard, the fact that the two had gone to the same collage helped Brock ingratiated himself. Venture was as morally ambiguous as his file had suggested but was so incredibly unmotivated to do anything of any threat to anyone and so Brock knew he was truly in exile from his life's calling. Though Brock resented his position he quickly warmed-up to his son's Hank and Dean Venture. Though Venture himself was of little threat he seemed to attract numerous super-villains as adversaries, most prominently a buttery-fly themed villain named The Monarch. Brock's primary concern became protecting Dr. Venture and his sons from The Monarch, who attacked them so often Brock began making a hobby of killing the droves on The Monarch's henchmen. The irony of the situation was that the Monarch was openly a member of the Guild of Calamitis Intent but by then the O.S.I. had come to realize their presence and resigned themselves to being their new adversary with SPHINX disbanded, however still Brock was not removed from his detail as Venture's body-guard.

At one point Dr. Venture looked like he would uncover the the secret of "The Orb" a device created by Dr. Venture's grandfather, said to be capable of massive power and potentially great destruction. Gathers told Brock he had orders to kill Dr. Venture to prevent The Orb's activation. Though he tried to talk his way out of it he knew his duty would be to kill Dr. Venture to stop him from accessing The Orb. To Brock's relief Dr. Venture actually decided to be the bigger man and not activate The Orb once he found it, saying that if it was hidden by his father there had to have been a good reason, and even if he was a terrible father he was a pretty great super scientist. With Venture actually willing to do the right thing, Brock made up his mind not to kill him after all.

Eventually Brock would quit as the Venture's body-guard and as an O.S.I. agent. The Monarch had planned a massive siege of the Venture compound and the O.S.I. had been turned corrupted by two Guild spies named Mr. Doe and Mr. Cardholder, who had organized a smear campaign against Brock. The head of the O.S.I. General Treister, ordered that Brock be extracted from his post. Brock manipulated both the Monarch and the O.S.I. into attacking at the same time and fighting each-other in the process. Brock had believed the O.S.I. was coming for him for not killing Dr. Venture but found out after the battle that General Treister and simply been concerned about Brock's wasted talent and overactive nerves. Looking out at the battlefield and all those who lay dead, Brock proclaimed he quit, not just the O.S.I. but his position as Venture's body-guard. An explosive in Brock's car wounded him gravely as he was turning to leave.

Brock would awake to find he was in an O.S.I. base. Brock had been taken in to be saved but knew his former allies were more than willing to resort to brainwashing or human experimentation and quickly made his escape after regaining consciousness. Brock would find that his source in the agency, Col. Gathers, was manipulating him the entire time. He had given Brock false information about the O.S.I.'s plans for Dr. Venture in order get him on the outs with the agency. Brock soon came to the consultation that his mentor had not retired as he had said but was in truth working his own angle. Col. Hunter Gathers would confirm that he was working undercover to endear himself to Brock's old flame Molatov Cocktease and her blossoming assassins organization. As a former O.S.I. agent Col. Gathers represented a tantalizing ally for Molatov. Gathers had a second reason though, he was testing Brock, seeing how far he would go to do what was right even at the cost of going against orders and trying to get him to sever his ties with the O.S.I. to be part of the Gather's origination SPHINX.

Col. Hunter Gathers had put together SPHINX, made up with various agents like him and Brock who had been burned by the O.S.I.. Some agents were burned for digging into areas they were assumed to never go, so for uncovering the O.S.I.'s own dirty laundry and some simply for being openly homosexual. Gather knew they had a stock pile of old SPHINX weaponry, vehicles and uniforms from their scuffles with SPHINX back in the 80s and decided to put it to good use. Gathers used the banner of SPHINX to create a new agency, one with the resources and experience of a super organization but applying it to non-super-villains, the cases the O.S.I.would not touch. Brock was welcomed in. At last Brock was able to do the work he wanted with the people he considered peers and putting his talents to their full use without any red tape to hold him back. Though even with his new vocation Brock still missed Hank and Dean and his time with them as part of his extended family. 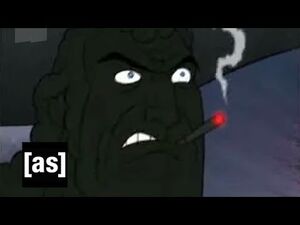 They Hit Me With a Truck - The Venture Bros. - Adult Swim 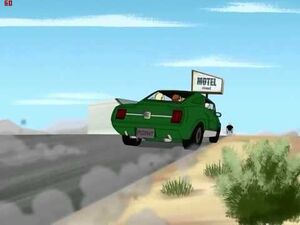