Defeat Galvanax and his minions (Succeeded)

Teenage Leader
Brody Romero is the main protagonist of Power Rangers Ninja Steel. He is also Sarah Thompson's love interest. He is the exuberant, youthful, positive 18-year-old leader of the Ninja Steel Power Rangers and the son of a ninja master named Dane Romero. Ten years prior to the events of Ninja Steel, Brody was captured by Galvanax after his father mysteriously vanished.

After his capture, Brody was forced to work as a slave for the Galaxy Warriors. During this time, he bonded with the robotic Redbot and a shape-shifting alien named Mick Kanic while gaining an enemy in his supervisor Ripcon. In the present after overhearing Galvanax's plan to get the Ninja Steel back on Earth, he, Redbot, and Mick take the opportunity to escape with the Ninja Nexus Prism. After being forced to use the ship's trash chute as an escape, he and Redbot became separated from Mick. Upon landing, he was attacked by Korvaka, but was saved by the unexpected arrival of Sarah and Preston. The three of them then pulled out three of the Ninja Power Stars, turning them into Power Rangers, with Brody becoming the Red Ranger.

Ten years ago, Brody's father vanished trying to defend the Ninja Nexus Prism from Galvanax, and Brody himself was abducted and imprisoned on the alien warlord's ship. After ten years of servitude he, along with his allies Mick and Redbot, are able to escape with the prism and land back on Earth. Used to being on his own, he can be headstrong and a little impulsive, but with the help of his new friends, soon settles into his role as leader of the Ninja Steel Power Rangers.

Brody is a Red Ninja Steel Ranger. He is the son of Ninja Master Dan Romero. Brody trained as a Ninja as a child along with his brother Aiden. One day Dane found the Ninja Nexus Prism. Which contained a powerful Ninja Nexus Star. Galvanax took Brody hostage to force his dad to give up the Prism. Dane become a Red Ninja Steel Ranger and lost the battle but was able to strike the Star with his sword before Galvanax could escape with it. This caused Dane to be housed in the Ninja Prism Nexus. The star then broke up into six Power Crystals. The Prism protected them from the Galaxy Warriors. Galvanax took the Prism and Brody to his ship. Brody spent ten years as a prisoner on Galvanax ship wondering what ever happened to his Dad and brother Aiken.

He is able to befriend fellow prisoners Redbot and Mick. When Galvanax realizes no one would be able to help him get the Power Stars, he decides to return to Earth to find the Ninja Steel. Brody escapes with his new friends to Earth but is confronted by one of Galvanax's monsters. Sarah and Preston take out the Ninja Stars, become Power Rangers and defeat the foe. Brody now searches for his brother and must protect the Prism from Galvanax and his Galaxy Warriors. Brody enrolls in Summer Cove High School like his friends. At first, he uses the Datacom which had lots of information to cheat in school and learns to think for himself. Later he meets Levi, a country music star, who he believes is stuck up but strikes up a friendship with. Levi ends up being the Gold Ranger and joins the team.

Later, Brody is approached by a young man claiming to be his older brother Aiden. Aiden seems hot-blooded and quick to want to fight Galvanax’s forces which the other Rangers do not appreciate. Brody defends his brother to a fault. Adrian tries stealing Ninja Steel from the secret hideout and fights with Levi. Levi discovers Adrian is really a robot. When Brody plays a family song his dad used to sing at a talent show, Levi’s memories return and he realizes he is Brody’s long lost brother Adrian. Brody is happy to have his brother back. When Galavanax steals the Ranger’s Ninja Stars and the Rangers themselves, Brody had a choice to make and chose to fight back and get his friends back. He then fought Galavanax the same way his father Dane did and he disappeared like his dad. He returned with Mick as Red Rangers and then his father Dane as a Red Ranger too. The eight Rangers defeated Galvanax. Brody was happily reunited with his dad. 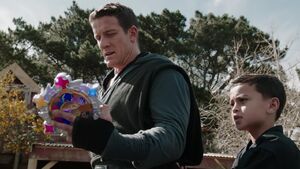 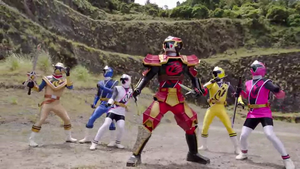 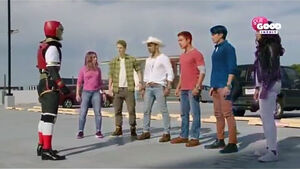 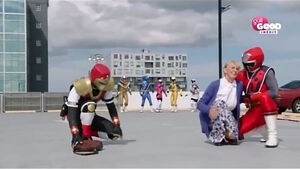