Bronx is the gargoyle beast (a dog-like gargoyle) pet of the Manhattan Clan in the animated series Gargoyles. He does not participate in many of the Gargoyles' adventures (mostly because he has no wings), but when he does, he proves to be a redoubtable fighter and can successfully intimidate the Gargoyles' opponents. And although his behavior is on par with that of any other domestic animal, Bronx had shown on occasion a heightened level of intelligence, being able to make personal choices and decisions. He also has a formidable appetite and will eat anything he considers food.

Bronx was voiced by veteran voice actor Frank Welker, who also known to having voiced several other anthropomorphic animal heroes in the series.

For the most part, Bronx behaved in the vain of any other watch-dog by defending the clan with great loyalty and dedication. As an extension of his role, Bronx would also gladly defend any of the clan's human friends, as was the case when he stopped Demona from destroying Elisa while the later was frozen in stone. He was smart enough to have detected Demona's presence inside Castle Wyvern while Xanato's security systems could not. As a direct corollary to his loyalty, Bronx had shown just as much resentment to the clan's enemies just as much as any other member. Without a second thought he lunged at Coyote and bit off half of its face. And although not as violent with Demona after she had tried to kill Elisa, Bronx still refused to let her approach Elisa while still petrified.

Bronx was hatched in the Wyvern Clan's rookery in the Kingdom of Scotland, in 978, and quickly became a valued member of his clan, operating as a guardian. He participated in defending Castle Wyvern from the viking marauders led by Hakon. And when he wasn't defending Castle Wyvern, Bronx spent most of his time playing with the other members of his clan, being particularly fond of the gargoyles who would become known as Lexington, Broadway and Brooklyn. After the Trio had gotten into a violent argument with some of the human peasants they, along with Bronx, were punished by the clan's leader, Goliath, forced to stay for the rest of the night in the rookery where a new cluster of gargoyle eggs was being kept. Because of there absence, Bronx and The Trio were sparred the cruel fate above ground. The castle had been once again attacked by Hakon's forces, this time during daytime, when gargoyles were frozen in stone and thus incapable of fighting of the intruders. After the castle had been taken (thanks largely to the betrayal of Castle's Captain of the Guard) Hakon proceeded to destroy all the gargoyles while they were still petrified, despite the Captain's protests.

The following night, Bronx and The Trio made their back to the surface, only to be horrified of their clansman's massacre and the disappearance of the castle's human population, including Princess Katherine and the court wizard, The Magus. The four of them met up with Goliath's second in comand (the future Hudson) and went after the vikings. They had successfully engaged the vikings and freed the prisoners but the princess was nowhere to be found, having been taken away to be held hostage by Hakon for a large ransom. The Magus believed that the princess had been murdered by the viking lord out of spite for the gargoyle attack and as such placed a spell on the remaining gargoyles, to be permanently frozen in stone until the castle could be risen above the clouds. But as it turned out Princess Katherine had been rescued by Goliath, with Hakon and the Captain having fallen to their deaths at a nearby cliff-side by the sea. Regretting his actions and having misjudged the gargoyles, The Magus wished to atone for his crimes, so he, together with Princess Katherine, a child named Tom (a friend of the Trio) and Tom's mother, all agreed to take the gargoyle eggs away and find them a new home where they would raise them away from harm. As a final act of redemption The Magus placed the same curse on Goliath so that he may spend the rest of his existence beside his last remaining clansmen.

The remaining Wyvern Clan gargoyles are eventually freed from the curse in the year 1997 after billionaire industrialist David Xanatos bought the entire castle and had it transported to New York, where it was rebuilt and restored on top of Xanato's personal sky-scraper, The Eyrie Building. Now that the castle had finally risen above the clouds the gargoyles could finally transform back to flesh during the day. After Xanatos had explained the situation to the clan, namely that they now lived during the 20th century and that, for all his knowledge, there where no more gargoyles left on earth, Bronx and the others tried to at least acclimatize to the situation. He would begin following Goliath's second in command around the castle and together began watching television, something that would become their favorite pastime together.

Leader of The Pack

After the Pack had been broken out of prison by Dingo, along with new member Coyote, The Manhattan Clan began hunting them down. Bronx was sent alongside Brooklyn and Lexington to investigate The Pack's old hideout, Pack Media Studios. Inside the studio the three are ambushed by The Pack and because of Coyote's superior leadership skills they are knocked out and taken as hostages on board the abandoned oil rigger, The Otoshima Maru. Fortunately, Goliath, Broadway and Hudson ambush The Pack and free their friends. During a heated battle Bronx pounces on Coyote (who at the time was believed to be non other then Xanatos) and bites half of the android's face off, revealing The Pack leader's robotic head underneath. As the battle reaches its conclusion, the oil rigger is set ablaze so the clan escapes the ship, however The Pack also manage to escape, with its human members having boarded Coyote's hover-craft, and Coyote's disembodied head launches itself in the air like a rocket.

After one thousand years Tom, now a middle aged knight clad in iron armor and going by the alias "The Guardian", arrives to Manhattan on board a skiff sent from the island of Avalon. The old friend of the gargoyles is searching for Goliath's help in saving the Avalon gargoyle clan from the attacks of Goliath's oldest enemy, the human wizard the Archmage's . Goliath hears of Tom's arrival from Elisa and decides to meets up with. Bronx begs to be brought along, to which Goliath agrees. Tom reveals to them that after he, Princess Katherine and The Magus had left Castle Wyvern to deliver the gargoyle eggs to safety, they had decided to settle on the island of Avalon as a last resort of escaping the tyranny of King Constantine The Third of Scotland. While on Avalon time span much slower then on the rest of the planet, and what seemed like a thousand years for the outside world felt like hardly fifty years for Tom and the rest of his companions. Unfortunately, they and the newly hatched gargoyles became the targets of The Archmage, The Weird Sisters and stranger still of Macbeth and Demona. With no other alternative Goliath, Elisa and Bronx travel to Avalon with Tom.

The Hound of Ulster

On their next voyage, The Avalon World Tour arrived in Ireland, in a bog near the village where one Rory Dugan, a disillusioned young man, lived. The village was also frequented by yet another Child of Oberon, the Banshee, posing as Molly, a friend of Rory's. The fairy took immediate notice of them and proceeded to attack them. Although Goliath, Angela and Elisa are rendered unconscious by the Banshee's magical yells, Bronx managed to escape into the forest wherein he met up with Rory and soon befriended him. Despite Bronx trying to lead Rory further in the forest he is assaulted by the Banshee, who then led Rory back to his home. The Banshee also carried the rest of the Avalon Tour inside Cairn na Cullen, the local ancient burial mound where Chu Chullain, the great Irish hero was said to have been laid to rest. Goliath recognizes the Banshee as a member of the sidhe, a subgroup of the Third Race that lived in Ireland. However, unlike others of her kind, the Banshee refused to eventually return back home on Avalon, as per Oberon's decree and was under the impression that Goliath and his crew had been sent by Avalon to bring her back. Despite their claims of never having even met Oberon, The Banshee refuses to listen and instead continues her assault.

Meanwhile, while under the disguise of Molly, Banshee visited Rory the following afternoon. As it turned out Rory began having memories surrounding Chu Chullain and his grave after having been visited by Bronx. The young man decides to travel to the ancient hero's grave do to the strong attraction and is followed along by Molly, who fears for his safety. Thanks to Bronx's shouts in the forest Rory manages to locate and enter the burial ground. Inside it is revealed that he is in fact Chu Chullain reincarnated in the modern era, and even summons his magic spear, Gae Bolga, and transforms into his warrior self. With the hero now restores, Molly reveals herself as the Banshee and also that she had tried preventing him from unearthing his true identity. Chu Chullainn is helped by Bronx in the fight against Banshee, and together manage to banish the fairy. In the aftermath Goliath, Angela and Elisa escape the tomb and meet up with Rory and Bronx. Rory thanks Bronx for having helped him recover his lost identity, and points out how the gargoyle beast reminded him of his the gargoyle beast he had back in antiquity. With the Banshee vanquished and Chu Chullain restored, the World Tour get back on the skiff and leave for another quest. Bronx is left revel in his accomplishment of having brought back Ireland's greatest hero.

As a gargoyle beast, Bronx exhibited several feats of great strength and skill that surpassed other large animals. For starters, he had superior physical strength and stamina, being able to carry a fully grown human adult on his back and run with them for miles on end. His strength was powerful enough to withstand damage caused by large iron objects, as was the case with the Coyote androids, as well as the attacks of large predatory animals, such as polar bears and panthers. And despite not having wings like the rest of his clan, Bronx did have razor-sharp claws with which he could claw onto building walls and cliff sides and thus climb up to the top. He could even do this while caring a person on his back. Because of his similarities to dogs, Bronx had superior hearing and a heightened sense of smell, thus making him an ideal tracker. 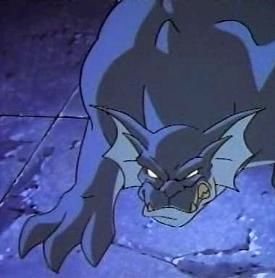 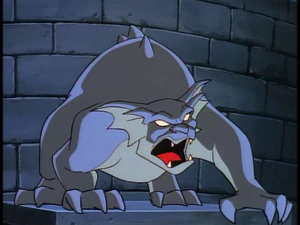 Add a photo to this gallery
Retrieved from "https://hero.fandom.com/wiki/Bronx?oldid=1945530"
Community content is available under CC-BY-SA unless otherwise noted.