She appeared for the first time in the episode "Brian the Bachelor".

She is a woman who was "looking for a man" on "The Bachelorette". Her final choice comes down to Brian Griffin and Glenn Quagmire, eliminating such contestants as Frankenberry and Trevor. She chooses Brian, who she first bonded with during a horseback riding challenge. Brian had fallen in love with her by this time. She ended up leaving him as it was only intended to be just a television show and not a long-term relationship.

She also appeared in the episode "Valentine's Day in Quahog", with all Brian's former girlfriends.

She is voiced by Jessica Biel. 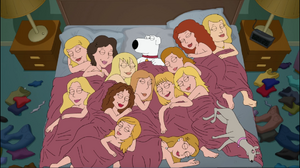 Add a photo to this gallery
Retrieved from "https://hero.fandom.com/wiki/Brooke_Roberts?oldid=1873417"
Community content is available under CC-BY-SA unless otherwise noted.