Humanoid
Brooklyn is a character from Gargoyles. He is Goliath's second-in-command. Brooklyn is one of the younger gargoyles of the clan. He survived the Wyvern Massacre along with his two Rookery-Brothers by being locked in the castle's rookery as a punishment for misbehaving.

Other than Goliath, who has several archfoes and archrivals, Brooklyn is the only gargoyle to have his own personal archenemy, as well, with his being Fang, whom he shares with Elisa's brother, Talon.

In the modern day, he displays an occasionally reckless and sardonic attitude, but also has the makings of a skilled tactician and leader, as evidenced by his promotion to Goliath's second in the second season episode Upgrade. He took his name from the New York City borough, Brooklyn. Brooklyn harbours a deep hatred for Demona, who tricked him in an early episode into betraying Goliath and allowing Demona to gain control of the lead Gargoyle via a spell. As such, he is prone to attack her on sight, much to the impatience of the clan who value his calculating nature.

During an extended absence by Goliath, Elisa Maza and Bronx, Brooklyn took control of the clan and led them with all the masterful skill Goliath knew he had.

Brooklyn is known for having bad luck with romances. His first apparent crush, on a human-turned-Mutate named Maggie Reed, ended badly, with her blaming him for her condition and saying he was a monster who wanted to keep her a monster. Though they later became friends, she entered into a relationship with Talon, another Mutate. Brooklyn also pursued Goliath's daughter Angela as a mate, and was heartbroken when she chose Broadway instead.

Shortly after, Brooklyn is whisked away in time by The Phoenix Gate (which crumbles to dust at his feet, releasing its trapped Phoenix) to 997 AD. He aids Mary and Finella (last seen trying to keep the Grimorum away from Constantine). He persuades Demona and her clan to help Kenneth III defeat Constantine. After the battle is won, the Phoenix appears to whisk Brooklyn away to another era (though not shown, he brings Mary and Finella along with him). After 40 years of traveling through the time stream, Brooklyn would return to his original time 40 seconds later with his family. 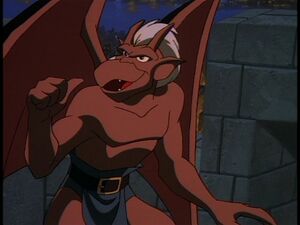 Retrieved from "https://hero.fandom.com/wiki/Brooklyn?oldid=2096912"
Community content is available under CC-BY-SA unless otherwise noted.