Heroes Wiki
Register
Don't have an account?
Sign In
Advertisement
in: Spoilers, Articles under construction, Jurassic Park Heroes,
and 27 more

Member of the Camp Fam

Brooklynn is the tritagonist of the DreamWorks and Netflix TV series, Jurassic World: Camp Cretaceous.

She is a 13-yr-old and one of the six campers at Camp Cretaceous and was invited there due to being a famous social media user. Now stranded alongside the other five campers, she is now trying to get back home from Isla Nublar though they face many dangers along the way. She is the girlfriend of Kenji Kon.

She is voiced by Jenna Ortega, who also played Phoebe Atwell in The Babysitter film series, Princess Isabel in Elena of Avalor and Harley Diaz in Stuck in the Middle.

At some point in 2015, Brooklynn was given a spot at the adventure camp known as Camp Cretaceous which is located north of the park Jurassic World due to her being a famous social media influencer under the account BrooklynnUnboxesTheWorld. However, she also had a life of things other than social media and never went to high school, and instead was given online tutors.

When she visits Camp Cretaceous, Brooklynn meets fellow campers Darius Bowman, Kenji Kon, Yasmina Fadoula, Sammy Gutierrez, and Ben Pincus, as well as her counselors, Roxie & Dave. They go on many fun activities together, but during her first night, she caught Darius and Kenji speaking awake in the Camp's foyer after curfew. When Kenji outed Darius for his attempt to sneak outside to see some dinosaurs, Brooklynn decided to join him so that she could film more content for her fans. Brooklynn and the two boys reached the Velociraptor Holding Pen as they mistook it for the Compsognathus Holding Pen. As Brooklynn filmed the pen, Kenji tried to take her phone so that he could film for her and impress her. As they fought over the phone, it slipped out of Kenji's hand and fell into the Paddock and Kenji climbed down to retrieve it as she watched. When Kenji was in danger, Brooklynn tried to save him by opening the main Paddock gate to get him out, but she accidentally opened the wrong door.

The following day, Brooklynn and the campers visited one of Jurassic World's remote Genetics Labs. Brooklynn filmed parts of the lab and manipulated Henry Wu into doing an interview by preying on Wu's ego. During the interview, Henry revealed the location of his private office, it gave Brooklynn the idea to sneak in to film Jurassic World's secrets for her fans. As Brooklynn snuck around, she ran into Sammy who was looking for it as well but played it off to hide her true intentions. Once on Wu's computer, Brooklynn looked around the screen and spotted folders labeled "E750 Clinical Trial Results" and "Classified". An alarm went off and the computer shut itself down when she tried to access the Classified Folder. Frustrated, Brooklynn stole a flash drive, searched through Wu's papers, and discovered the existence of the Indominus rex before Wu caught her. This prompted Wu to kick everyone out of the lab due to the breach in security. The Flash Drive that Brooklynn had taken from the lab was stolen by Sammy, who gave it to a Mantah Corp drone.

Before the Cattle Drive, Brooklynn had read some negative comments on her latest Jurassic World video and this left her upset. She was paired with Darius who was reluctant to take her as a partner because she disregarded his campfire story the night before. During their time in the Gyrosphere, Brooklynn opened up a little to Darius. When the storm rolled back and effectively canceled the Cattle Drive, the weather had scared a Sinoceratops which prompted it to run away from its herd. Darius used this opportunity to cheer up Brooklynn by using the retrieval of the Sinoceratops as an excuse to help her film exciting content for her fans.

With her phone missing, Brooklynn interrogated Sammy the next morning. At some point during the night, Sammy had stolen Brooklynn's phone so that she couldn't be reported on. As she argued with Sammy and Yasmina, they were interrupted by the sound of a mysterious roar coming from outside. Brooklynn and the other campers followed Darius to the Observation Tower to see if they can spot the source of the noise. They watched the Indominus rex kill a Brachiosaur and a pair of park workers who were trying to get them to stay inside. As the Indominus rex tried to take down the tower, Brooklynn and the others escaped via zip line to the forest floor and successfully evaded the hybrid. The children returned to the camp to find it in ruins. Brooklynn continued to accuse Sammy of stealing her phone as well as stealing skin samples of the Sinoceratops. Yasmina stepped in to protect Sammy and she argued with Brooklynn until Darius stepped up to give an inspiring speech.

As the group of survivors made their way through the jungles of Isla Nublar, they found themselves at Gray and Zach's broken-down Gyrosphere and they met up with Bumpy, the baby Ankylosaurus from the genetics lab that Brooklynn and the others visited prior. Eventually, they reached an ACU vehicle and were chased by the Indominus rex once again. The children managed to escape and took refuge inside the Genetics Lab where they encountered Eddie, one of the scientists who had been left behind. The children watched helplessly as the Indominus rex attacked the van and killed Eddie. The predator then turned its attention to the children and searched for them. They managed to reach the van and escape from the Indominus rex once again. As they drove away, the van crashed and the campers were forced to continue on foot.

Having witnessed Simon Masrani's death and the escape of the Pteranodons, Brooklynn and the other campers took cover inside the cave that housed the River Adventure attraction. Once inside, they climbed into the kayaks and paddled through the underground river toward the Jurassic World Lagoon. During the trip down the river, Brooklynn continued to complain about Sammy until Kenji stepped in and reminded her that being mad at Sammy won't fix their situation and that she should try to be a little nicer with her. After narrowly avoiding death at the jaws of the Mosasaur, the children took refuge in the bleachers next to the Jurassic World Lagoon. As they rested, Brooklynn approached Sammy and reconciled her. An alarm blared through the park and informed the Park Attendees to head for the Ferry. Their plans to reach the southern docks were interrupted by a Monorail that was pulling into the station at Main Street. The children encountered Toro and they managed to escape thanks to Darius's distraction and the Carnotaur's inability to climb stairs.

Just as they thought they were safe aboard the monorail, a flock of Pteranodons ambushed them. During the attack, Ben had fallen out off, despite Darius's attempt to save him. Things only got worse as Darius realized they have headed back toward the North due to the track change that occurred earlier. The kids jumped off the monorail and lost Bumpy in the process. Without any time to spare, the children cut through the Underground Tunnel to get to the Ferry. While they were underground, the campers encountered Toro once again.

Having defeated Toro, Brooklynn and the survivors finally reached the dock. Unfortunately, they had been left behind. With no sign of help coming any time soon, they return to seek shelter within the island interior.

At first, Brooklynn turned out to be a bit of a brat, caring about her phone, and social media, even though she and the Campers had much bigger problems. For example, when Darius tried to start a conversation with her. she just kept ignoring him and paid more attention to her phone. Later on, they found a deserted van Brooklynn was checking on the tablet and began complaining about not having her phone, which caused Darius to snap at her. Fortunately, Brooklynn began to change and mature more, as she bonded with the other campers, becoming close friends. In fact, she even bonded with one of them so much that they are now in a relationship (in a romantic way). 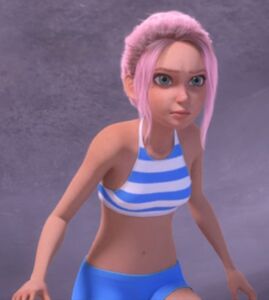 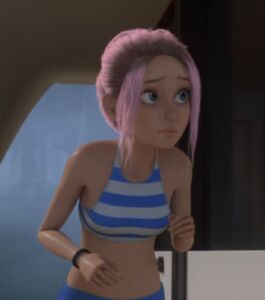 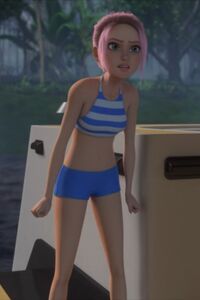 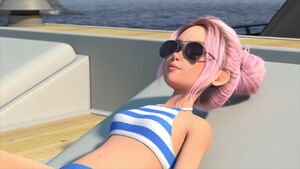