Brown Yoshis are a rare variety of Yoshi found only in a few games.

Brown Yoshi first appeared in Super Mario World 2: Yoshi's Island where it was playable in the sixth level of each world. It was also in the remake, Yoshi's Island: Super Mario Advance 3. However in Yoshi's Island DS, it was replaced by Orange Yoshi, making it the only color from the original game not to appear in the sequel. In all levels he's found in with an exception for World 5 he is always found in cave levels.

One Brown Yoshi makes a cameo in the introduction of the game Yoshi's Story. It wears green shoes. As with Purple Yoshi, Brown Yoshi was originally intended to be a playable character but was dropped from the roster.

A single Brown Yoshi made an appearance in Paper Mario where he was shown to be childhood friends with the Village Leader. Whenever the Fearsome 5 ran into the Jade Jungle and Sushie gives chase, the Brown Yoshi shows deep sorrow as though none of the children are actually its own, it sees them as something of "grandchildren" to it. This Yoshi is the only one not to run around in a single area and cry during this conflict. As with the other Yoshi villagers (except the Yoshi Cabana shopkeeper), this Yoshi thanks Mario for his assistance in finding the children and makes an appearance on the Yoshi Float in the parade at the game's end. 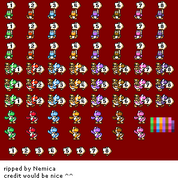