Brucey (referred to by himself)

Bruce: Anchor and Chum's 'boss' and leader of the Fish-Friendly Club

Anchor and Chum: Please their boss

Bruce: His father (only mentioned)

Nemo, Each other, Marlin, Dory

Bruce, Anchor, and Chum are supporting characters of Finding Nemo . Despite their intimidating presence, they are actually very social sharks who are against eating fish.

Bruce is a gentle, friendly, but very intimidating great white shark who is the leader of the sharks in the therapy sessions they attend. He has the ability to dilate his pupils and go predatorily insane if he smells one whiff of blood (which is an uncontrollable sixth sense), as shown when when he smelled Dory's blood after Marlin accidentally hit her nose with Phillip Sherman's diving mask and could not control himself from chasing Marlin and Dory around the entire ship in his berserk bid to eat them. It is also revealed that Bruce never knew his father and gets very sad whenever he brings it up. His inspiration is Firewater.

Anchor is a scalloped hammerhead shark who is friends with Chum. He is the more tame of the sharks as he brought a live fish named Blenny with him, without eating him. His inspiration is Mr. Grits.

Chum is a lively and comedic shortfin mako shark with a hook piercing on his right nose, and bottom teeth that jut out from his mouth. He's the second less tame of the shark trio as he already ate his friend he was going to bring to the shark therapy sessions. Chum also hates dolphins and loves jokes. His inspiration is Twinkie.

Marlin and Dory first encounter Bruce while Marlin is trying to find his son. Bruce invites the duo to a get-together with his other shark friends Anchor and Chum, who attend the shark therapy in a sunken ship. After a while, the sharks let Dory introduce herself and clap for her. They then ask Marlin to introduce himself and tell them some jokes. Just as Marlin is about to tell them the joke, he is interrupted by the presence of the divers' mask. Dory suggests to a reluctant Marlin to find a fish who can read the address on the back of the mask. This causes a tug-of-war between the two, which accidentally causes Marlin to sling the mask at Dory, causing her nose to bleed and Bruce to get the whiff of blood. Bruce then can't control himself as he chases after Dory and Marlin with Anchor and Chum trying to snap him out of it. After an ensuing chase throughout the entire ship, Bruce accidentally spits a launched torpedo from his mouth. He snaps out of his blood-crazed rage, and when he notices that the ensuing torpedo is about to land on an underwater mine field, he gives the orders to his friends to swim away, which they do as Marlin and Dory watch the torpedo touches the mines. This causes an explosive chain reaction which Marlin and Dory survive from.

The shark trio are seen again towards the end of the film escorting Dory back home to the Great Barrier Reef and as they swim back, they remind Dory to not forget their mantra. 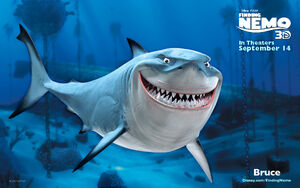 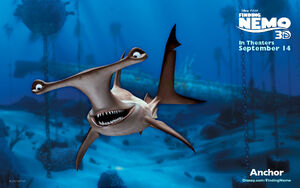 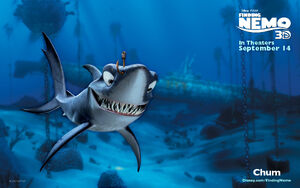 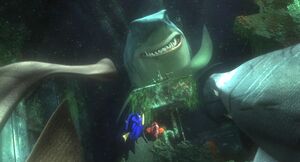 The sharks reciting their motto. "I am a nice shark, not a mindless eating machine. If I am to change this image, I must first change myself. Fish are friends, not food." 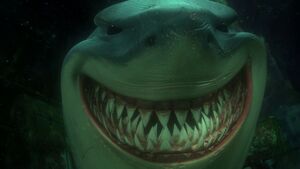 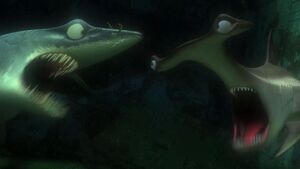 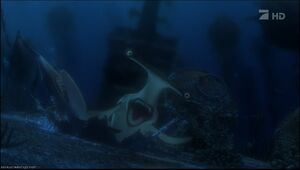 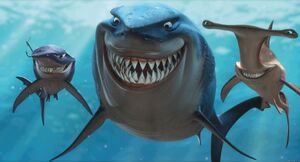