Brunnhilde (also known as Valkyrie) is a fictioanl superheroine from Marvel Comics and universe. She is an Asgardian, and mainly a member of the Avengers and the Defenders. She was created by Steve Englehart and Sal Buscema.

She was created by Roy Thomas, Sal Buscema, and Steve Englehart, and first appeared in Defenders #4 in February of 1973.

In the Marvel Cinematic Universe, she is portrayed by Tessa Thompson.

An Asgardian by birth, she was selected by Odin to lead the Valkyrior. Among her other aliases are Barbara Denton-Norriss, Samantha Parrington, and Sian Bowen who all were host bodies to the spirit of Brunnhilde. Samantha Parrington, a previous host of Brunnhilde, later received Valkyrie's powers and became a member of the Defenders herself. She is also an ally and one-time love interest of Thor.

Brunnhilde was born million years ago, and was the princess of Wrlstead Arms, being the lover of Sigmund.

Sigmund was killed upon Odin's brother, the Serpent coming to Earth and corrupting the land as the king of Asgard decided to destroy Earth. Upon Sigmund's death, Odin realized he needed to give him a paradise, and chose Brunnhilde as his Valkyrie because she was willing to die for him. By becoming a Valkyrie, she was allowed to take the souls of any warrior perished in battle to Valhalla for their honor and valor. Brunnhilde later became the leader of the Valkyrior, a group of warrior goddesses who would appear over warriors who fell in battle, and were worth to be taken to Valhalla.

According a sentient eye that once belonged to Odin, the king of Asgard gave his son Thor the mortal identity of Siegmund, and he attempted to kill Siegmund due to circumstances. Realizing that Odin was acting against his true wishes, Brunnhidle attempted to protect Siegmund to no avail. As punishment for defying Odin, Brunnhilde's powers and immortality were removed and she was cast down to Earth into a trance. There, she became Siegfried's lover, who was the son of Siegmund and was the mortal reincarnation of Thor.

Siegfried later fell under the influence of magic, betrayed Brunnhilde, and was later murdered. Still in love with Siegfried, Brunnhidle leaped into his funeral pyre, and Odin restored both their lives and gave them back their powers. Odin later admitted that he wiped Valkyrie and Thor's memories of the time on Earth.

Brunnhilde encountered Amora the Enchantress near the outskirts of Marmoragard, and accompanied her after being offered a life full of adventure. Brunnhilde later discovered Amora's inclinations towards immortality and attempted to end their partnership, but Amora entrapped the Valkyrie within a mystic crystal of souls. Over centuries, Amora used Brunnhilde's soul to give the Valkyrie's powers to herself or to pawns, and occasionally used her magic to alter her appearance to look like Brunnhilde.

The first time Amora assumed Brunnhilde's appearance was to lead superheroines against the male Avengers, but her identity was discovered and her plan was thwarted. Months later, Amora bestowed Brunnhilde's power upon Samantha Parrington to get revenge on the Hulk. Barbara Norriss was also given Valkyrie's powers and conscious by Amora in order to help the Defenders, who were being battling against the sorceress Casiolena. After the sorceress' defeat, Amora didn't undo the spell she placed on Barbara, and Norris possessed Brunhilde's conscious, appearance and powers while Barbara's essence was trapped in the Valkyrie's body in Asgard. However, Brunnhilde had partial amnesia, and was unaware that she was in possession of Barbara's body, and was constantly pursued by Barbara's husband.

The Valkyrie decided to join and remain with the Defenders, becoming a long term member with the team. She fought against many foes of the Defenders, including the Brotherhood of Evil Mutants, the Red Ghost, Attumma, Nebulon and the Squadron Sinister, and were tricked by Loki and Dormammu to fight against the Avengers. Later on, Brunnhilde was arrested for destroying a restaurant while fighting Chondu the Mystic, but later stopped a prison riot and was aided by her teammates. Defender Nighthawk then hired Matthew Murdock as Brunnhilde's lawyer, and she was freed. However, her costume was thrown out by authorities after she was freed, but Clea made her new costume.

When the Asgardian warrior Ollerus attempted to take over Valhalla, the Valkyrie's two mixed aspects met for the first time, as Brunnhilde's mental essence trapped Barbara's transformed body fought Norriss' mental essence trapped in the Valkyrie's real body. Norriss' mind was still in Brunnhilde's body, and after the encounter, was sent to the realm of Niffleheim, as Brunnhilde in Norriss' body returned back to Earth. Eventually, Brunnhilde regained her body with the help of Doctor Strange and after her spirit was freed from Norris' body after it's physical death. Back in her body, Brunnhilde regained her memories and banished Amora into the crystal of souls for imprisoning years prior.

After being on Asgard for a while, Brunnhilde decided to return to the Defenders and helped them battle Casiolena, and remained witth them until the team was dissolved. Brunnhilde was ordered by Odin to teach Moondragon humility, and if the latter become evil once again, the Valkyrie was tasked to defeat the goddess. Though Moondragon reformed, she fell under the influence of an entity called the Dragon of the Moon, and ttacked the Defenders. Brunnhilde succeeded in stopping Moondragon with Archangel and Cloud, as she was given temporary powers by Odin for special occasions.

Later on, Moondragon escaped and returned to attacked the Defenders after having her powers augmented by the Beyonder. Brunnhilde allied with the Eternal called Interloper, and they projected their life forces against the Dragon. With the aid of Andromea and Manslaughter, but were seemingly transformed into statues of ashes and dust, and the Dragon and Moondragon were apparently gone. She returned to escort Doctor Strange into the afterlife, but he refused and with considerable effort, returned to life. Eventually, Brunnhilde returned to a semblance of life by possessing others, and she briefly served as a member of the "Dragon Circle" with other fallen Defenders members. She later passed Dragonfang and Aragon to Samantha Parrington, as she had joined the Defenders and replaced Valkyrie on the team.

Brunnhilde died among the many upon the events of Ragnarok, as she was killed by Durok the Demolisher. Sif was inherited with Dragonfang, but Aragon was still with Samantha before Brunnhilde returned upon the Asgardians' resurrection, and joined the Secret Avengers.

After the Serpent War, Brunnhilde was tasked by Odin to find and destroy Cul Borson's (Serpent) eight hammers so they couldn't be used again, and she was unable to prevent Sin from obtaining the hammers and activating the Final Sleeper. The Final Sleeper killed Brunnhilde by snapping her neck, but her sacrifice allowed the other eight Valkyrior to return to Earth and claim the hammers. Freyja suggested that the Valkyrie should lead a new team from heroines that were on Earth, and Brunnhilde returned and became interested in new Secret Avengers member, Agent Venom. 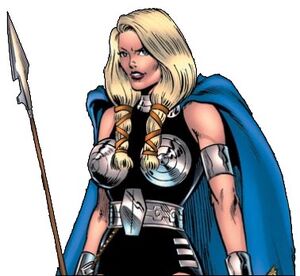 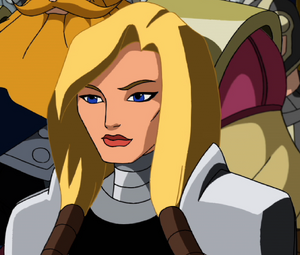 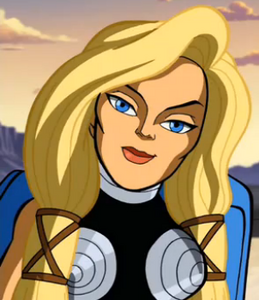 Brunnhilde in The Super Hero Squad. 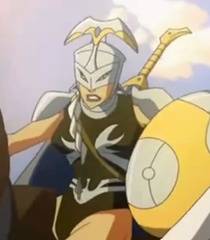 Brunnhilde in Hulk vs. 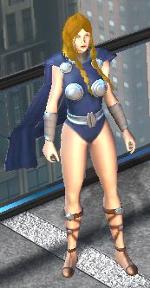 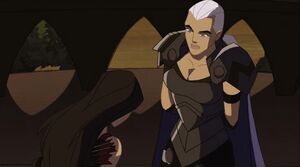 Brunnhilde in Thor: Tales of Asgard.

Tessa Thompson as Brunnhilde in the MCU. 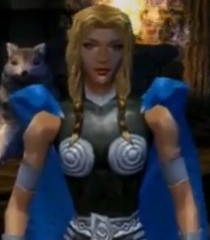 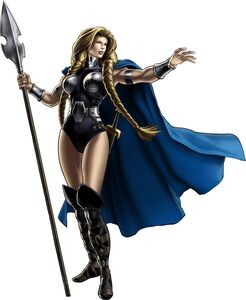 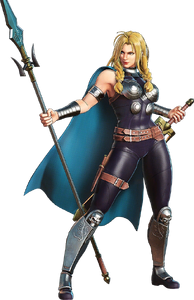