Bruno
The Footman (as a human)

The Footman (when he is turned to a human)

Loyal Sidekick
Bruno the Bloodhound (or Bruno for short) is Cinderella's dog. He loves Cinderella by caring for her. However, he hates his feline counterpart Lucifer, as seen in the original film, when he chased Lucifer out of the tower, which made the latter fall to the ground (though he survived). He is one of Cinderella's pets, the others one being Major the Horse (this does not include Lucifer, as he is the pet of Lady Tremaine and her daughters).

In the original film, Bruno is first seen as a puppy with Cinderella and her father. As a grown up dog, he is first shown sleeping in the kitchen, dreaming about chasing Lucifer. When Cinderella wakes him up, he is happy to see her, but she then tells him how it is bad that he has caught Lucifer in his dream and that he should learn to be nice to cats, which is an idea he does not like. She tries to point out that Lucifer has his good points, but she can't think of any, which causes Bruno to laugh at Lucifer's expense. Lucifer then scratches Bruno on the face, causing him to growl at him, and then Lucifer pretends that Bruno has hurt him, resulting in Cinderella sending Bruno outside.

In the middle of the movie, Bruno watches Cinderella run outside to the garden, wearing her torn-up dress (destroyed by Anastasia and Drizella due to the bead and sash which they threw away earlier and not wanting her to go to the ball), to cry on the bench nearby. He and Major look sad for the fact about what happened to her and that she is not going to the ball. Then they see a fog with sparkling stars is heading to her, which turns out to be the entrance of her Fairy Godmother. Bruno is turned into a footman by her for Cinderella's coach to take her to the ball; on the stroke of midnight, when the spell is broken, he is turned back into his true form. With Cinderella, Major, and the mice, he runs behind the bushes, away from the palace guards who go past the pumpkin and smash it. He is shown to be happy that Cinderella had fun at the ball and danced with Prince Charming.

Near the end of the film, Lady Tremaine has locked Cinderella in her bedroom, and Jaq and Gus have stolen the key from Lady Tremaine, but Lucifer has trapped it and Gus under a teacup before he can free her. Realizing that Bruno may be the one who can get rid of Lucifer, Cinderella tells her bird friends to fetch him and to allow Bruno to finally catch the cat he hates the most. They fly down to the shed and try to wake him up, with Major helping them. He then follows them as he rushes into the chateau and, after being helped by them to get inside, scrambles up the tower staircase to arrive just outside Cinderella's room, where he catches Lucifer. He then lets out a growl, scaring Lucifer into jumping out the window. He jumps on the windowsill to watch Lucifer fall to the ground below, finally getting back at him while allowing the mice to finally free Cinderella from her room. He is last seen joining her on her honeymoon.

In the second movie, Bruno has a much smaller role than he had in the first film. He appears only in the first segment, Aim to Please and is so happy about Cinderella returning to the castle from her honeymoon that he gives her a kiss in the face. The next morning, a sharp and snobbish woman named Prudence enters Cinderella's room, where she finds Bruno sleeping in Cinderella's bed; he licks her face in response. 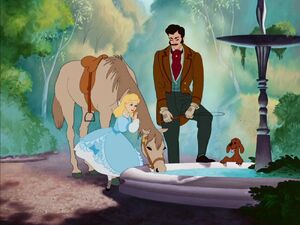 Bruno as a puppy with a younger Cinderella and Cinderella's Father 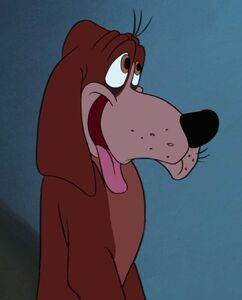 Bruno in his original form (as a dog) 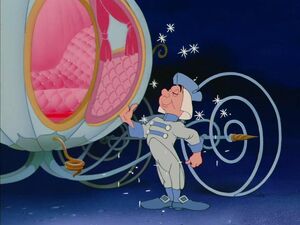 Bruno in his human form, after being transformed into a human by the Fairy Godmother