Member and capo of the Passione Syndicate
Leader of Team Bucciarati

Bruno Bucciarati is the deuteragonist and a core ally featured in Golden Wind.

Bucciarati appears as a mid-sized man with a slim build. He has black chin-length hair with straight-cut bangs covering his forehead and a braid along the top of his head.

His attire is composed of an all-white coat covered in small black spoon-like symbols, with a open chest similar to Giorno and zippers in random places alluding to his Stand, Sticky Fingers.

His appearance seems to have stayed consistent since childhood with no particular differences outside his height and clothing.

Bruno makes a small appearance in the one-shot wearing a blue two-buttoned jacket plus a matching pull-over and dotted shirt underneath it, with gray trousers and brown shoes.

He is consistently portrayed as red-haired.

Bruno Bucciarati, first introduced as a sly gangster, is quickly revealed to be a righteous, but ruthless individual.

During his introductory arc, Bruno Bucciarati acts like a seemingly affable gangster toward Giorno Giovanna, starting chitchat on various subjects during which Bruno reveals his more violent side. This behavior is later shown to be an act he puts up with unfamiliar people outside of Passione, and he would later conduct himself in the same manner with two airport security guards.

Bruno Bucciarati's most important character traits are his righteousness and his natural kindness. Bruno is dedicated to taking the most honorable course of action, even if he puts his life at risk. For instance, at the age of seven, Bruno chose to stay with his father when his parents divorced as he thought he should support the one parent who suffered from this separation. Moreover, Bruno overtly rebelled against Diavolo when the Boss clearly wanted to kill his daughter, Trish Una, resulting in his premature death. Bucciarati is loyal to the civilians of his territory, being considerate with them accepting their requests for help, and is generally nice to the people he meets.

Bruno respects and upholds several values such as determination, commending Giorno's determination in their fight, selflessness as he is prepared to sacrifice himself for his beliefs and his duties, and family loyalty, being outraged that Diavolo would dare hurt his own child. Bruno particularly despises the drug trade, which caused his father's death and is hurting the population on a large scale, thus any mention of it unnerves him. Because of his allegiance to Passione which is selling drugs in the street, Bruno is conflicted between his code and his duty as a lieutenant. Giorno notes that Bucciarati was at odds with himself when he used Sticky Fingers to hide inside the body of a teenager who was addicted to drugs. Due to this, he decided to quietly support Giorno Giovanna's infiltration of the gang while still working for the organization. Shown to be against Narancia joining the gang, telling him to live a normal life, Bruno doesn't hold the gangster life in high regard.

Bucciarati is consistently shown to be serious, even as a young child, and usually keeps a serious and unflinching demeanor throughout the story. As a lieutenant and team leader, Bruno is dedicated to leading his team seriously and fulfill his mission. Bruno is constantly seen reigning in his less disciplined subordinates, being severe but fair as well as very protective of them, earning him the respect of his team. For the sake of his teammates, Bruno keeps a stern facade of determination, ordering his team to carry despite the recent loss of Abbacchio even though he too was distressed by Abbacchio's sudden death. Bruno is shown to have a paternal side with Narancia, whom he sheltered and counseled to stay away from the life of a gangster, as well as with Trish whose worries about being the daughter of a mob boss he tries to comfort the best he can.

In contrast to his righteousness, Bruno has a violent and ruthless side. At the age of ten, Bruno coldly murdered his father's would-be aggressors, and as a gangster, kept his tendency toward violence. Upon their first meeting, Bucciarati violently beat down Giorno and referred to his interrogation as a torture session. In a fight, Bruno will often use lethal force against his enemies and always try to kill those he sees as irredeemable.

During a fight, Bruno is both brave and cautious. While he is ready to sacrifice himself in order to win, Bruno will try tactical retreats and sneak attacks regularly, as seen when he tried to ambush Diavolo.

Bucciarati's Stand Sticky Fingers allows him to create zippers on any solid object or surface, including his own body parts, which he can zip open and close at his leisure. Sticky Fingers also demonstrates exceptional strength and defense in combat.

Bruno is a remarkable fighter in a Stand fight; having mastered the versatile power of Sticky Fingers, he can easily use the environment to his advantage, restrain his enemies, swiftly evade incoming attacks, and attack from blind spots. His natural selflessness means that survival is not among his priorities, thus his actions will easily surprise his opponents.

Bruno is also a perceptive fighter, having been able to quickly deduce the weaknesses of King Crimson despite being fatally injured and proceed to take advantage of them. He is able to analyze his opponents' fighting styles and perceive their strengths and weaknesses.

Bruno is able to know is someone is lying simply by looking at them, claiming that when a person lies their skin glistens due to sweating. He can also taste a person's sweat to distinguish them as a liar, claiming that the sweat of a liar tastes sweeter than normal. 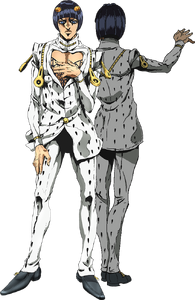 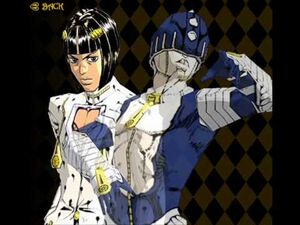 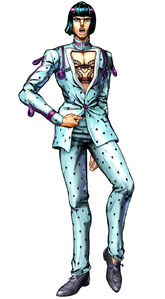 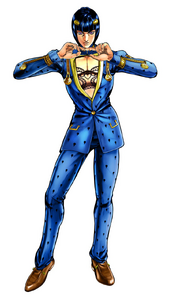 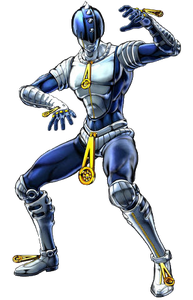 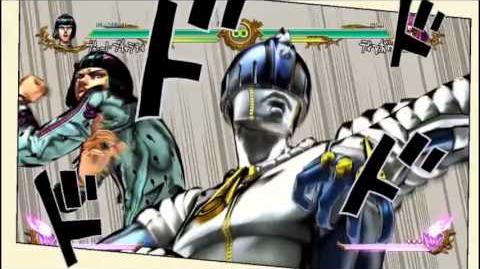 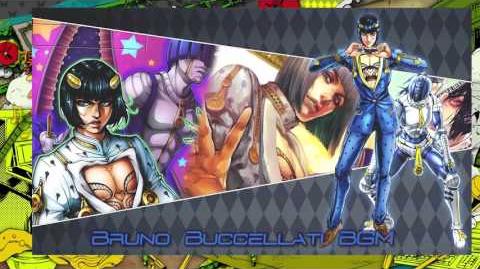 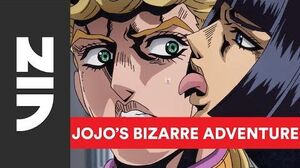 Retrieved from "https://hero.fandom.com/wiki/Bruno_Buccellati?oldid=1969326"
Community content is available under CC-BY-SA unless otherwise noted.