Hanging out with his daughter.

Having barbecues with his friends, playing poker and watching TV.

Protect his ex-wife and daughter from the men seeking against Bryan for his actions. (Second Film)
Take down Stuart St. John. (Third Film) (All Succeeded)

Bryan Mills is the main protagonist in the Taken film series. As a former CIA agent, he is an expert in hand-to-hand combat along with tracking people down and firing a wide range of weapons with great accuracy. Although he could fire just about any weapon, his pistol of choice was an Italian Beretta 92FS.

He is played by Liam Neeson, who also portrayed Qui-Gon Jinn in Star Wars Episode I: The Phantom Menance, Oskar Schindler in Schindler's List, and Aslan in The Chronicles of Narnia Disney and Fox film adaptions.

Bryan, a former CIA operative who acted as a "preventor", where he did counter-terrorism work, is now retired and has moved to Los Angeles to have a closer relationship with his teenage daughter, Kim. She lives with her mother, Lenore, and her wealthy stepfather, Stuart. While working as security with former colleagues, Bryan saves pop star Sheerah from an assailant after a concert. Sheerah, grateful, agrees to tutor Kim after Bryan says she aspires to be a singer. Kim asks Bryan for permission to travel to Paris, France, with her friend Amanda. Bryan balks at the two girls travelling alone, but relents when Lenore complains that he is overprotective. He gives Kim an international cellphone, and makes her promise to call every day. At the airport, he learns that the girls are not staying in Paris, but are following U2 during their European tour.

Arriving in Paris, Kim and Amanda meet Peter, a scout for a kidnapping gang, who offers to share a cab with them. At the apartment, Kim discovers that Amanda's cousins, with whom they are staying, are in Spain. While talking to Bryan on the phone in the bathroom, Kim sees Amanda being kidnapped by intruders. Bryan instructs her to go to the nearest room and hide under a bed. He explains that when the men find her, she has to shout out their physical descriptions. Kim is pulled out violently from under the bed, and she complies with her father's instructions before the phone is found and destroyed.

Bryan informs Stuart and Lenore of their daughter's kidnapping. Bryan's former colleague Sam tells him that based on the recording, Kim has probably been taken by an Albanian human trafficking ring that has recently begun abducting female tourists to get them addicted to drugs and sell them into prostitution. He also says that if she is not rescued within 96 hours, she will likely never be found. Bryan travels to Paris, and finds Peter at the airport attempting to lure another tourist. After a confrontation and chase, Peter is hit and killed by a passing truck before Bryan can interrogate him.

Bryan then seeks out Jean-Claude (Olivier Rabourdin), a former French intelligence officer who now works a desk job. Jean-Claude is relatively unhelpful but does direct Bryan to a district where a gang are prostituting women. Jean-Claude afterwards has the police put a tail on Bryan and soon warns Bryan that his vigilante methods will result in him getting deported, but Bryan avoids arrest. Bryan follows one gangster to a makeshift brothel at a construction site, where he finds a girl wearing Kim's jacket. He fights off the brothel guards and escapes with the girl. After the girl awakens, she gives Bryan enough information about the house where she met Kim to allow him to find it.

Bryan confronts the Albanians, and identifies the kidnapper on the phone as Marko. He wounds Marko and kills the others. Searching the house, he finds several captive teens, including Amanda, who is dead from an apparent overdose. In the basement of the house, Bryan straps Marko into a makeshift electric chair and tortures him into divulging Kim's location; as a virgin, she was very valuable on the black market, and was sold to an auctioneer named Patrice Saint-Clair. Bryan leaves Marko to die, and visits Jean-Claude at home. Having deduced that Jean-Claude is taking kickbacks from the kidnappers, he extracts Saint-Clair's home address by threatening to kill his wife.

Bryan infiltrates Saint-Clair's mansion, where a large party is the facade for an auction of girls in the basement. Bryan forces a Middle-Eastern bidder to purchase his daughter, but is captured after they exit the room. Bryan frees himself and kills Saint-Clair's henchmen. He forces Saint-Clair to reveal where Kim has been taken before killing him. Bryan races the luxury yacht owned by Raman, a sheikh, and boards it. There, he kills the boat's guards, confronts the sheikh in his boudoir, and shoots him in the head, rescuing his daughter. They return to the U.S. where she is reunited with her mother and stepfather. Afterward, Bryan takes Kim to see Sheerah for her first singing lesson.

The funerals of the Albanian mobsters killed by Bryan Mills in the prior film are held in Tropojë, Albania. Murad, the leader of the gang and father of Marko—whom Bryan had killed by electrocution—vows to capture Bryan, bring him to the graves and avenge their loved ones. Murad and his men torture Jean-Claude Pitrel (the corrupt policeman from Taken) to try to learn Bryan's location. They end up bribing an official for the information.

Meanwhile, Kim and her mother Lenore, who is currently having marital problems, surprise Bryan by joining him in Istanbul, Turkey, where he has just finished a three-day security job. The next day, Lenore and Bryan go out for lunch. Bryan realizes they are being followed. After a chase, the men capture Lenore, forcing Bryan to surrender, but before he does, he calls Kim and warns her. Her would-be abductors shoot another hotel guest and two security guards, but fail to find her and are forced to flee.

Bryan wakes with his hands tied to a pole in a dark room. Using a communication device that he had hidden in his sock, Bryan calls Kim, instructing her to go to the US Embassy and tell them what happened, but she begs for a chance to help him and Lenore. Under Bryan's guidance, she opens his suitcase, containing weapons, and throws a grenade onto a deserted rooftop parking lot. Bryan uses the time it takes for the sound of the explosion to reach him to help locate where he is. He then has her take a gun and two more grenades and take to the rooftops.  While he is tied up, the Albanian mobsters bring in a struggling Lenore and hang her upside down. One takes a knife and slits a tiny gash in her throat, which will kill her if not treated.

They tell Bryan he has to watch her bleed out and die before he dies. When the mobsters leave Bryan is able to undo his chains and calls Kim to detonate two more grenades so he can determine his location. The grenade detonations enable Bryan to guide Kim close enough to see steam he sends up a chimney to mark his precise location. Kim tosses the gun down the chimney. Bryan uses it to kill the Albanians in the building, then saves Kim from her rooftop pursuer. Lenore, however, is taken away by her captors.

Leaving Kim at the embassy, Bryan retraces the route to Murad's safe house he memorized from his abduction.

After killing the rest of the gangsters and rescuing Lenore, he confronts Murad, who confirms Bryan's guess that his two remaining sons will seek revenge if Bryan kills him. Bryan offers to let Murad live if he gives his word to end his vendetta. When the man nods his head, Bryan drops his gun and starts to walk away. Murad seizes it and tries to shoot Bryan, only to discover that Bryan has removed the bullets. His actions proved his untrustworthiness, and he is soon killed by Bryan when he kicks him onto a hook. Three weeks later, the Mills family are at a diner back home in southern California to celebrate Kim passing her driving test. They are joined, much to Bryan's surprise, by Kim's boyfriend Jamie. Kim jokingly asks her overprotective father not to shoot him. 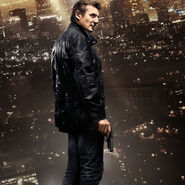 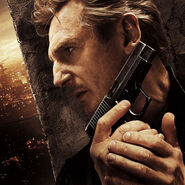 Liam Neeson is the only action movie actor/celebrity to have also starred in the 2002-2003/2004 animated TV show, Liberty's Kids along with Arnold Schwarzenegger and Sylvester Stallone as they all portrayed as the voice actors for the real life people in a cartoon series, John Paul Jones, Baron Von Steuben and Paul Revere.

Retrieved from "https://hero.fandom.com/wiki/Bryan_Mills?oldid=2265649"
Community content is available under CC-BY-SA unless otherwise noted.