Elf
Bryony Shelfley is the tritagonist of the 2011 Christmas film Arthur Christmas. She is voiced by Ashley Jensen.

Bryony has short brown hair with a blonde streak, brown eyes and pointed ears. Her attire consits of a green camoflage outfit, black boots, black fingerless gloves and a piercing on her right eyebrow.

She speaks with a Scottish accent.

She is an elf who works for the Claus family in The North Pole. She originally worked as a Wrapping Divison Grade 3 elf. One Christmas after Malcolm Claus (the current Santa) returned from delivering presents, Bryony found a present that had not been delivered and discovered it to be a bike for an English girl named Gwen.

When Malcolm's son and heir Steve claimed that they can send the present to Gwen in a few days, Bryony along with Steve's younger brother Arthur and Grandsanta travel to England to deliver the bike in Grandsanta's old sleigh Evie which is pulled by the great-great grandchildren of the original eight reindeer.

Though they face challenges along the way, the trio arrive in England and Arthur is able to leave the bike in Gwen's house and leave just as she wakes up. After Arthur is made the new Santa, Bryony is made Vice-President of Packing, Pacific Division.

Bryony is very skilled in wrapping gifts and can wrap anything whether it be her own head or the head of a lion. 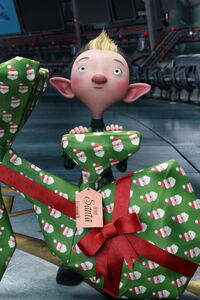 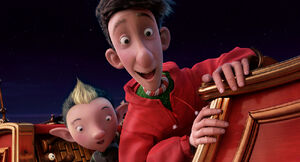 Bryony with Arthur
Add a photo to this gallery

Retrieved from "https://hero.fandom.com/wiki/Bryony_Shelfley?oldid=1840463"
Community content is available under CC-BY-SA unless otherwise noted.