Charles Elliot Ritter better known as Bubba Ritter is the posthumous main protagonist of the 1981 horror movie Dark Night of the Scarecrow. He is a mentally handicapped thirty six year old man who was wrongfully executed by a mob of vigilantes. After his death, his spirit returns and possesses the scarecrow that he died in to seek revenge.

Bubba lived somewhere in an indiscernible Southern town with his mother. Sometime, he befriended and became best friends with a little girl named Marylee Williams. Marylee would go on to teach Bubba various things such as; the alphabet and how to pick flowers. One day the two were frolicking in a field of flowers, unaware that they were being watched by the town's mailman, Otis Hazelrigg, who had a hatred of Bubba.


While wandering around, Bubba and Marylee came across the Renfro's backyard. After looking through the fence, Marylee lifted up one of the boards and climbed through, much to the reluctance of Bubba. While messing around in the backyard, Marylee is attacked by the Renfro's guard dog. Bubba breaks through the fence and rescues her from the dog. Believing her to be dead, Bubba carries her home, but is only able to utter "Bubba didn't do it" as Marylee's mother screams.


After hearing about the news, the police have a manhunt for Bubba. However, instead of joining the search, Hazelrigg and his three friends grab some dogs and guns and hunt for Bubba on their own, to kill him. Bubba runs home and his mother comforts him and tells him to go play the hiding game. The four men get to Bubba's home and order Mrs. Ritter to give up her son. But, Mrs. Ritter tells them that Bubba would never harm anyone and to get off her land.


The dogs lead the mob to a lone scarecrow out in the fields. Hazelrigg investigates the scarecrow and sees Bubba's eyes, so he backs up and fires the first shot. The three other men start firing into the scarecrow, until Bubba's dead. Just after his death, Hocker is informed by a friend that Marylee was still alive and had confirmed that it wasn't Bubba who attacked her. Horrified of the consequences to come, Hazelrigg puts a pitchfork in Bubba's limp hand and makes it look like they shot him in self-defense. 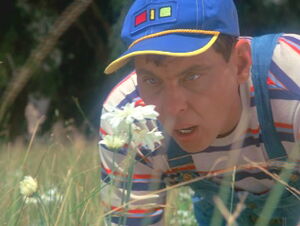 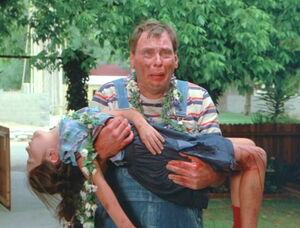 Bubba carries a bloodied Marylee home.
Add a photo to this gallery

Retrieved from "https://hero.fandom.com/wiki/Bubba_Ritter?oldid=1585948"
Community content is available under CC-BY-SA unless otherwise noted.