Bubbleisha is one of the original Shoppies released in October 2015.

In August 2016, Bubbleisha was included in the Happy Places line as a Lil' Shoppie, and was released in theBathing Bunny Welcome Pack with twelve Petkins.

A variant of Bubbleisha was included with a re-release of the Sweet Spot Playset in September 2016.

In October 2016, the character was released as a part of the Season Six Chef Club line.

In July 2017, a San Diego Comic Con exclusive variant of her was released. There are only 1,500 models of this variant.

Later in 2017, a China-themed World Vacation version of her was released for wave two of Season Eight.

In November 2018, a variant of her was released with the Sweet Treat Truck Deluxe playset exclusively to Walmart on Black Friday.

In January 2019, a Lil' Secrets version of her was released with the Princess Hair Salon Secret Lock. 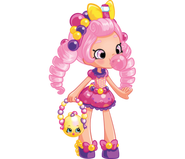 Add a photo to this gallery
Retrieved from "https://hero.fandom.com/wiki/Bubbleisha_(Shopkins)?oldid=1588224"
Community content is available under CC-BY-SA unless otherwise noted.