Turning into a huge ball

Searching for candy during Halloween

Bubbles, the Orange Bird is a character in the Angry Birds series of games created by Rovio Entertainment. He was introduced late in 2011 and is the third bird not originally part of the Flock. In the Fuji TV exclusive episode Sakura Ninja, Orange Bird appears dressed in a Soldier costume, making it the first time he has appeared in costume in any game and completely new game sprites were created for the respective episode. He is a supporting character in The Angry Birds Movie and its sequel.

He, Along with Hal the Green Boomerang bird, appear in the Angry Birds 2016 Film. He is voiced by Smosh Member, Ian Andrew Hecox.

His sprite sheet shows him to appear to be quite cheerful. From the Ham'o'ween Short Movie, he is shown to be oblivious to events happening around him. He has a gigantic appetite and a sweet tooth. In the Trick or Tweet video, he disguises himself as a giant Frankenstein Pig to frighten away the other birds, in order to steal their portion of candies, showing that he is clever, mischievous and loves playing pranks.

In both of the Halloween-themed animations, he is shown to be quite spoiled. He feasts on candy that others have gone through the trouble of collecting without any consent, and becomes enraged when a pig takes something in which he wants to the point of harming that pig and others.

Little is known about Orange Bird’s history before he met The Flock. When first seen, he was inadvertently and obliviously kidnapped by Pigs while he ate their Halloween candy. The Blues were the first to see him and followed the Pigs in disguise to their fortress with the intent on rescuing him. However, Orange Bird was able to free himself and defeat the King Pig when the greedy pig attempted to eat the piece of candy he wanted to eat. For the first time, Orange Bird gets angry and then he ballooned up to ginormous size and pinned the King Pig.

In the Trick or Tweet video, the members of the Flock went around Trick-or-Treating for Halloween. Orange Bird disguises himself as a giant Frankenstein Pig to frighten away the other birds, in order to get their portion of candies. By doing so, he accumulated a lot of candy for himself. In the end, the birds discovered that they have been fooled and returned with Terence to get their candies back.

The Pigs never rest in their quest to steal eggs and the Flock often has to retrieve their eggs on holidays and special occasions.

At an indeterminate time, the Flock was captured as rare birds and taken to Rio de Janeiro, Brazil where they fought with Blu and Jewel and their friends against Nigel the cockatoo and Mauro and his marmosets. Orange Bird did not appear originally in Rio, but arrived much later after the others, so it is possible he was not kidnapped originally and made his way to Rio to help rescue The Flock.

In addition to Rio, Orange Bird has also traveled to China.

In another adventure, many of the Flock were whisked into Space via a wormhole, gained super powers and fought the Space King and the Space Pigs. White Bird and Boomerang bird appear to have been left behind on the island.

A very small amount of the Orange Bird is known in Angry Birds Space before he was released in the game. The knowledge about the Space Orange Bird is that he is known as the Cosmic Bird (or the Fan Alias of Atom Bird), and he has a Space Vest. In July, he made his way into space to help the Flock, or because of the smell of Utopian Candy.

The Orange Bird inflates like a balloon when the player taps the screen or clicks their mouse (depending on the version of the game they are playing) however, unlike the Black Bird, its expansion doesn't displace all the objects within its blast radius, rather, it forcefully expels the objects closest to it but objects just slightly hit at the extent of the inflation will barely move and even stay in place. This makes him most effective when he lands right next to the desired target, as even though it may hit objects further out, it does little to nothing against them. When an Orange Bird expands within an enclosed space or crevice smaller than itself, it will quickly push itself outward until it has room. Though his looks may be deceiving, Orange Bird actually is stronger than he looks, in the app, he is able to break many layers of wood and glass.

Although it expands to a huge size, its strength doesn't change when flying. When the player taps the screen while the bird is flying, it appears as it would cause great damage, but it does minimal damage when fired this way. 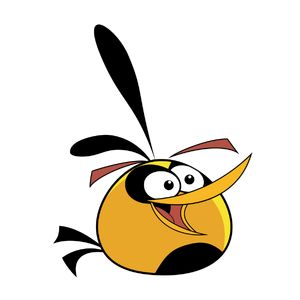 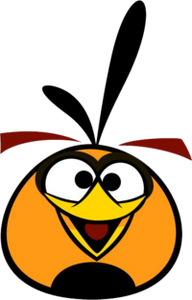 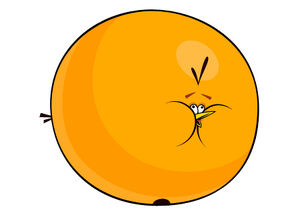 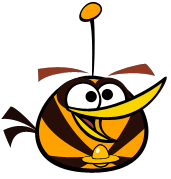 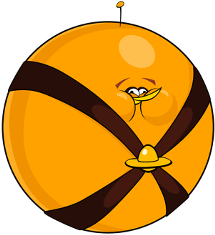 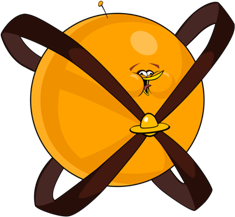 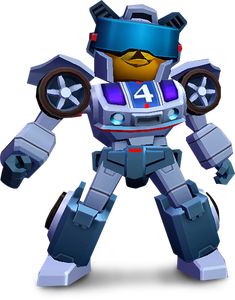