Kid
Sibling
Heroic Creation
Bubbles is one of the three main protagonists of the 2016 reboot of The Powerpuff Girls .

she is voiced by Kristen Li.

Bubbles is shown to be joyful and naive like her original counterpart, although a bit more airheaded and less intelligent. Altough she displays above average programming skills as shown in the episodes Viral Spiral, The Trouble With Bubbles, and Oh, Daisy!. Like her 1998 counterpart, she is shown to be a major animal lover.

Unlike her 1998 counterpart, she seems to be less girly then not to an extreme like Buttercup. In the episode Derby Dollies, Bubbles is shown to have taken a liking to sports, implying she may be a bit tomboyish and sporty.

Her appearance differs slightly from her original counterpart, as she has bigger pigtails and visible blue hair ties in her hair.

Also, her pigtails are placed on top of her head, instead of at the sides of her head. They are also more curvy at the ends. When her hair isn't pulled up in pigtails, she has blonde shoulder-length hair. Like her original counterpart, she wears a blue dress with a black horizontal stripe at her waist, white tights, and black Mary Janes.

In the episode Trouble Clef when Bubbles appears alongside Blossom and Buttercup performing at Morbucks' concert, her hair is tied up in a high ponytail with a mint green hair tie. She wears a pink ballet dress, white tights, and purple shoes with green warmers on them.

In the Christmas episode The Gift, Bubbles is shown in a dark blue version of Santa's red suit along with a black belt and red pants. Her hair ties are a lighter shade of blue and she wears a blue party hat and black shoes. 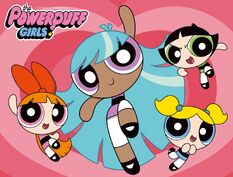 Retrieved from "https://hero.fandom.com/wiki/Bubbles_(Powerpuff_Girls_2016)?oldid=1727729"
Community content is available under CC-BY-SA unless otherwise noted.