Buck (The Call of the Wild)

The Call of the Wild

Being with his owners.

Find love and happiness for someone who cares for him (succeeded).
Find freedom from humanity with his own kind (succeeded).

Buck is the main protagonist of Jack London's 1903 short adventure novel The Call of the Wild, and its adaptations. At first, Buck is a pampered dog living in the Santa Clara Valley in California. However, the Judge's gardner, Manuel captures him and sells him to the Yukon. As the story progresses, Buck changes as he is forced to work as a sled dog in the harsh conditions of the Yukon. However, a man named John Thornton rescues him and adopts him and Buck begins to become part of the wild.

He was portrayed by Terry Notary in the 2020 film, who also played King Kong, Groot and Rocket.

Buck is a large and powerful St Bernard-Scotch Shepherd living happily in California's Santa Clara Valley as the pampered pet of rich Judge Miller and his family. However, he is stolen by the gardener's assistant, Manuel, and sold to finance his gambling addiction. He is ill-treated and starved by the smugglers, while being shipped to Seattle. He attacks a trainer known as the "man in the red sweater", but he teaches him the "law of the club" until he tires out and shows some kindness towards him. Buck is then sold to a pair of French-Canadian mailers named François and Perrault, who take him with them to the Klondike region of Canada. There, they train him as a sled dog. From his teammates, he quickly learns to survive cold winter nights and the pack society. Buck befriends a female Newfoundland dog named Curly, but she gets killed by a pack of wild huskies. A rivalry develops between Buck and the evil lead dog Spitz. Buck eventually beats Spitz in a fight to the death. Spitz is killed by the pack after his defeat by Buck, and Buck eventually becomes the leader of the team.

When Francois and Perrault reach Dawson with their dispatches, and are given new orders from the Canadian government, the team is then sold to a "Scotch half-breed" man, who is also working the mail service. The dogs must carry heavy loads to the mining areas, and the journeys they make are tiresome and long. One of the team, a morose husky named Dave, becomes sick and the half-breed is forced to put him out of his misery.

Buck's next owners are a trio of inexperienced and incompetent stampeders named Hal, Charles and Mercedes. They struggle to control the sled and ignore helpful advice from others, in particular the warnings that the spring melt poses dangers. They overfeed the dogs and then starve them when the food runs out. On their journey they meet John Thornton, an experienced outdoorsman, who notices the dogs have been poorly treated and are in a weakened condition. He warns the trio against crossing the river, but they ignore his advice and order Buck to move on. Exhausted, starving, and sensing the danger ahead, Buck refuses and continues to lie unmoving in the snow. After Buck is beaten by Hal, Thornton recognizes him to be a remarkable dog. Disgusted by the driver's treatment of Buck, Thornton hits Hal with the butt of his axe, cuts Buck free from his traces, and tells the trio he is keeping him, much to Hal's displeasure. After some argument, the trio leaves and tries to cross the river, but as Thornton warned, the ice breaks, and the three fall into the river and drown, along with the sled and neglected dogs.

Buck comes to love and grow devoted to Thornton as he nurses him back to health. He saves Thornton when the man is being beaten by a gangster named Black Burton and falls into a river. After Thornton takes him on trips to pan for gold, a bonanza king named Matthewson, wagers Thornton on the dog's strength and devotion. Buck wins by breaking a half-ton sled free of the frozen ground, pulling it 100 yards and winning US$1,600 in gold dust. A king of the Skookum Benches offers a large sum to buy Buck, but Thornton has grown fond of him and declines. Using his winnings, John Thornton retires his debts, but elects to continue searching for gold.

While Thornton and his two friends Pete and Hans are panning in a campsite, Buck explores the wilderness and socializes with a timber wolf from a local pack. However, Buck decides not join the wolves and elects to return to Thornton, mirroring John's refusal to sell Buck. However, Buck returns to the campsite to find Hans and Pete murdered, then sees John Thornton suffered the same fate. Buck finds out the murderers were a tribe of Yeehats when he realizes the Indians also stole John Thornton's luggage (as the items still bore the kindly man's scent). Buck eventually kills the natives to avenge Thornton, and he then is attacked by an entire pack of wolves. Buck wins the fight, then finds that his wild brother was in the pack he fought. Buck then follows the wolf and its pack into the forest, and answers the call of the wild. The legend of Buck is spread amongst other Indian tribes as the "Ghost Dog of the Northland". Buck comes out of the backwoods once a year on the anniversary of his attack on the Yeehats, at the former campsite where he was last with John Thornton, Hans and Pete, in order to mourn their deaths. 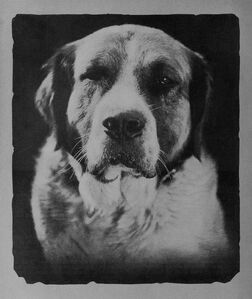 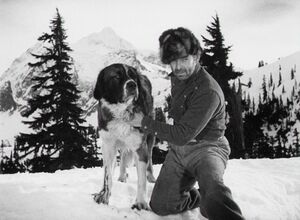 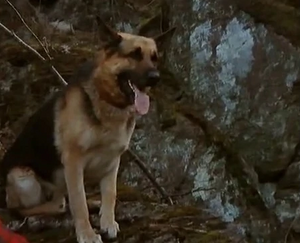 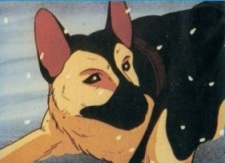 Buck in the anime film. 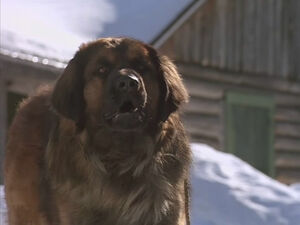 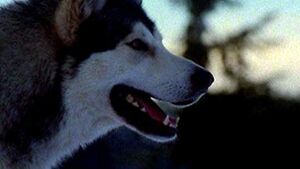 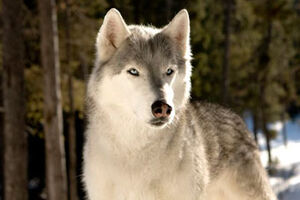 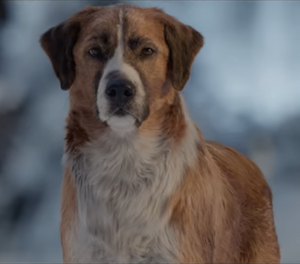