James Buchanan "Bucky" Barnes is the sidekick of Captain America, when Bucky accidently walked into Steve's changing room he became Bucky. Bucky was also Captain America when he thinks Steve Rogers is dead. Bucky appeared in Captain America: The First Avenger as a young private, Captain America tried to save him but he fell to his death. After being brainwashed by the Red Skull, he became an agent known as the Winter Soldier but later broke free and became a freelance mercenary.

Bucky was originally the camp mascot at the base where Steve Rogers, the first Captain America was stationed, and when he stumbled upon Steve changing out of the costume, Steve was forced to take him on as a sidekick. Bucky's wartime adventures would come to an end when he and Captain America tried to sabotage a drone bomb bound for the US. While Captain America survived and plunged into the icy waters of the Arctic to be discovered decades later by The Avengers, Bucky was thought dead when the drone bomb exploded with him on board. His death continued to haunt Captain America after the latter's revival in the present. 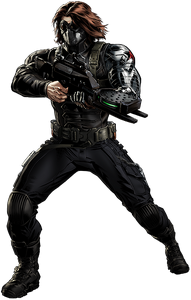 Bucky as the Winter Soldier 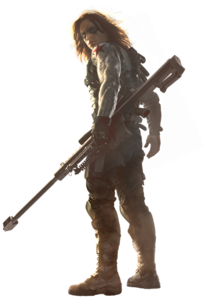