Playing with his toy dinosaur, Rapty

Varies depending on the episode

He is voiced by Julie Lemieux who also voiced Soak from Keroppi and Friends, Renée Ratelle from Jacob Two-Two, Coochie and Coo from Rolie Polie Olie: The Baby Bot Chase, and Funshine Bear.

Bud is a rabbit with a light brown complexion. He wears a green shirt, blue vest, long blue jeans, and black boots. He has light brown hair. He wears his red hat so often that most people haven't seen him without it.

He loves to play with his stuffed dinosaur, Rapty, who is also his imaginary friend. Bud is also a multi-talented preschooler as he can make animal sounds, make jokes, and is one of the few kids that can handle the Tibble Twins, much to D.W.'s delight. He dealt with the Tibbles by staring at them, which scared them off, but in the episode "Read and Flumberghast", Tommy Tibble is shown sidestepping this by putting on sunglasses. Bud explained to D.W. that he has had staring contests with his older brothers and sisters ever since he was two, and has never lost. Despite being a shade of brown himself, he dislikes the color brown, preferring the color black. 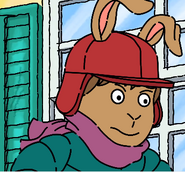 Bud without his hat on

Bud and D.W. sleeping together in a tent
Add a photo to this gallery

Retrieved from "https://hero.fandom.com/wiki/Bud_Compson?oldid=1937317"
Community content is available under CC-BY-SA unless otherwise noted.