Keep the Louds' and other neighbors away from his house.
Steal the Louds' objects and keep it forever when ends up in his yard (all formerly).
Protect his yard.

Bud Grouse is a antagonist-turned-major character in The Loud House. He is the grumpy next-door neighbor of the Loud Family and he seems to get along well with them. After "11 Louds a Leapin'", he and Lincoln became friends. Like the Louds, he also has a big family, but lives alone, far from them.

He is voiced by John DiMaggio. Who also voices Bender Bending Rodriguez from Futurama and also voices Jake the Dog from Adventure Time.

Bud is a elderly, bald and grumpy neighbor of the Loud family whose first name was revealed in the Family Tree graphic novel and the episode "The Write Stuff". In "11 Louds a Leapin", it is revealed that Mr. Grouse tends to confiscate any items of the Loud siblings that accidentally end up on his property (including Bobby). Also, it is revealed that Mr. Grouse has a large extended family that he can barely pay a visit to due to financial difficulties. In most episodes, it is shown that Mr. Grouse can be bribed with certain foods like Lynn Sr.'s lasagna in exchange for favors.

Mr. Grouse as a young adult

Mr. Grouse as a kid 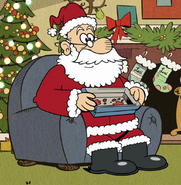