To get rid of Hunters

Animal
Buddy is a character in the Open Season franchise.

He was voiced by Maddie Taylor.

He is a blue North American Porcupine.

Buddy is friendly, nice, sweet-natured, kind, thoughtful, calm, and somewhat shy and docile. He can also be accident-prone.

At first, everyone blames Boog, who accuses Elliot of lying to him about leading him home. Elliot admits he thought that if Boog spent time with him, he would befriend him.

Boog helps the other animals defend themselves using supplies taken from an RV owned by two people looking for Bigfoot named Bob and Bobbie's RV while their pet dachshund Mr. Weenie joins "the wilds".

The next day, Boog leads a revolution against the hunters, sending them running after McSquizzy blows up their trucks with a propane tank named "Mr. Happy" ignited by using an emergency flare. Shaw returns for a final confrontation and shoots Elliot in the process, which enrages Boog and leads him to tie up Shaw with his own gun. Boog rushes over to Elliot's body but soon finds that Elliot survived the shot, only losing his second antler in the fracas. The other animals thank Boog for his help and then proceed to take out their vengeance on Shaw by smothering him with honey and pillow feathers.

Beth returns to take Boog back home where he will be safe, but he decides to stay with his friends, all of the animals in the forest.

Buddy and the others manage to cheer Elliot up by having a rabbit fight. But Elliot has new emotions about his marriage and feels reluctant to marry Giselle.

When Boog's best friends find out about Boog's disappearance when Doug's cover is accidentally exposed, they (as well as Mr. Weenie, a reformed Fifi, Roberto, and the other pets) put aside their differences and hatch a rescue mission to save Boog. Gisela comes up with the plan to save Boog and the gang go to the circus to go to rescue him.

That night, the wilds arrive at the Maslova Family Circus. They want Boog to return home, but he doesn't want to leave Ursa. Suddenly, a reformed Doug arrives, apologizes to Boog for tricking him, and reunites with Alistair. While Doug performs the circus acts for the audience, Elliot tells Boog he can stay at the circus if he wants to. Boog doesn't want to leave Elliot or Ursa, so he convinces Ursa to go live in the forest with them.

The next morning, Ursa enjoys life in the forest and becomes Boog's girlfriend, Gisela, Giselita, and Elvis' adoptive aunt, and Elliot and Giselle's sister-in-law. Finally, Boog, Elliot, and their male best friends go on the guys trip and sing part of Willie Nelson's "On the Road Again."

Determined to help Boog overcome his fears, Elliot, Mr. Weenie and their woodland friends band together to scare the fear out of Boog and uncover the mystery of the Wailing Wampus Werewolf. 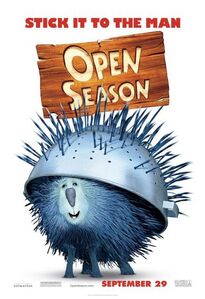