Defeat strong opponents, Serve Ash to the best of his abilities.

Pokémon
Buizel is a Water-Type Pokémon from the Generation IV games. It evolves into Floatzel at Level 26. It is one of Ash Ketchum’s Pokémon, which originally belonged to Dawn and a hero from the Pokémon anime.

He was voiced by Kiyotaka Furushima.

As Ash, Dawn, and Brock headed for Hearthorne City, they found out about a powerful Buizel that was defeating the Pokémon of any Trainer that fished in the river it lived in. Interested in catching it, Ash and his friends went fishing to try and find Buizel, meeting up with Zoey at the river. Dawn eventually managed to hook the Sea Weasel Pokémon and sent out her Piplup to fight him. However Buizel was easily able to overpower it, before taking on Zoey’s Glameow, defeating it as well. Finally Ash sent out Pikachu to fight the Sea Weasel Pokémon, who managed to put up a fight against Buizel and actually damage him. However he escaped the Poké Ball Ash used on him and defeated Pikachu, before making off with the group’s fishing rods. They followed Buizel up the river, where Ash, Pikachu, Dawn, and Piplup began imitating the special training they saw the Sea Weasel Pokémon doing so as to prove themselves to him. Buizel watched this, developing a slight fondness for Ash, but then Team Rocket showed up to steal him. They caught the Sea Weasel Pokémon in a net and Ash managed to cut the net from their balloon. However Buizel fell, still stuck in the net, but Dawn stopped him from landing full force. This prompted the Sea Weasel Pokémon to give Dawn a rematch and was defeated by Piplup, allowing her to capture Buizel.

Soon after this, Dawn introduced Buizel to her other Pokémon, but he acted very callous towards them and got in a fight with Piplup. To help, Ash had Turtwig fight the Sea Weasel Pokémon and he won, though he ignored Dawn’s commands in the battle. At the Pokémon center, the group ran into Lucian, one of the Sinnoh Elite Four. Buizel, knowing Lucian’s skill at battle, was eager to fight him and he agreed to a match. The Sea Weasel Pokémon took on the Elite Four member’s Bronzong and again didn’t listen to Dawn’s commands. But this time, Buziel’s attitude lead to his defeat, as he couldn’t match Bronzong’s power. He became extremely depressed, having never really lost a fight before and Lucian said that Buizel needed to take some to time to get over the loss and get back his fighting spirit. Team Rocket showed up to try and capture the Sea Weasel Pokémon again, but he regained his drive, breaking out of the cage they’d put him in. Lucian then commanded Buizel in fighting Team Rocket to show Dawn how to use his fighting style and defeated them. Dawn then began understanding the Sea Weasel Pokémon’s battle style more and tried to help him develop it. After Dawn found out the Hearthorne City Contest would be a Double Performance Contest, she decided to use Buizel with her Buneary. She devised a move called the “Ice Aqua Jet”, where Buizel used his Aqua Jet, before being frozen by Buneary’s Ice Beam, turning him into an icy projectile. However the first time Dawn tried this combination, it was unsuccessful, but she worked on perfecting it before the Hearthorne Contest. At the contest, she planned to use Buizel in the second rounds, but failed to make it through the first round. Later, Dawn used the Sea Weasel Pokémon in the final round of the Hearthorne Tag Battle Competition alongside her partner, Conway’s Heracross. They went up against Ash’s Chimchar and Paul’s Elekid and proved to be a powerful combination. But before they could win, Elekid evolved into Electabuzz, allowing it and Chimchar to defeat Buizel and Heracross.

Dawn eventually started training Buizel for the contest in Solaceon Town, but he seemed to be more interested in Ash’s training for his Gym Battle, rather than contest training. Likewise Ash’s Aipom seemed more interested in contests. Zoey suggested that Ash and Dawn trade Aipom and Buizel and Dawn wasn’t sure about doing so at first, since Ash was so close to Aipom, but Zoey pointed out that Buizel didn’t seem to enjoy Contests. The two Trainers thought hard, before finally trading their Pokémon. Soon afterwards, to get used to their new Pokémon, Ash and Dawn had a battle with Buizel and Aipom, but in the fight, the Sea Weasel’s SonicBoom was deflected into a stone tower, freeing a Spiritomb. Buizel was later used in Ash’s Gym Battle with Maylene, taking on her Lucario. It was during this fight that the Sea Weasel Pokémon first used Water Pulse and utilized his ability, Swift Swim. However Buziel and Lucario finally knocked each other out, tying the battle. When Ash decided to enter the Wallace Cup, he used Buizel, who was able to make it through the appeal rounds with a combination of Aqua Jet, Water Gun, and Sonic Boom, as well as usage of his inflatable neck float. Buizel was also able to win his first battle round against a Kecleon, but was defeated by a Lanturn in the next round, despite using a perfected version of Ice Aqua Jet. Later, as Ash’s Pokémon were training for the Pastoria Gym Battle, but Pikachu accidentally shocked Buizel. The Sea Weasel Pokémon angrily tried to attack Pikachu, only to be restrained by Turtwig. Buizel would remain mad at the Mouse Pokémon during the Gym Battle, where he was sent out to take on Crasher Wake’s Quagsire. He managed to win with his Ice Aqua Jet, before taking on Wake’s Floatzel. However Buizel was badly beaten by his opponent, who managed to turn most of his attacks back on him, even confusing him with his own Water Pulse. Ash took Buizel out, replacing him with Pikachu and the Sea Weasel Pokémon managed to snap out of his confusion, seeing the Mouse Pokémon fighting a losing battle. After Floatzel partly froze Pikachu, Buizel wanted to be put back in, high fiving Pikachu and breaking the ice as it took over the fight. The Sea Weasel Pokémon finally defeated Floatzel with a point blank Water Pulse, winning Ash the Gym Battle. Later on, during Ash’s battle at the Hearthorne Gym, Buizel took on Fantina’s Gengar. In this fight, he was the first of Ash’s Pokémon to use his Counter Shield technique and managed to beat Gengar, but was defeated by Drifblim. In Ash’s battle at the Canalave Gym, Buizel took on Byron’s Steelix, but his Water Gun was easily stopped by the Iron Snake Pokémon’s Screech, which also left him unable to move. Steelix then used Bind to restrain Buizel, before throwing him into the air and defeating him with Iron Tail. Later, during Ash’s full battle with Paul, he sent out the Sea Weasel Pokémon as his first Pokémon, but recalled him after Paul chose Torterra. Ash eventually used Buizel to take on Paul’s Magmortar, but the Blast Pokémon proved to be a difficult opponent, despite the Sea Weasel Pokémon having type advantage. Magmortar even managed to poison Buizel with Smog, before Paul switched it out with Ursaring. Despite the Hibernator Pokémon’s strength, Buizel was able to take it on, even damaging Ursaring with the Counter Shield technique. Though clearly being weakened, Buizel asked Ash to keep him in the fight, but he was finally defeated by Ursaring’s Focus Blast. On another occasion, the Sea Weasel Pokémon impressed a trainer named Clayton with its courage. Buizel fought his Mr. Mime and was defeated, leading to Clayton helping Ash and the Sea Weasel Pokémon perfect their fist attacks with Buizel even learning Ice Punch. In a rematch, Buizel took on and beat Mr. Mime, using his Swift Swim ability again. Later, Ash took on Flint, another Elite Four member, and used Buizel to fight his Infernape. But even with his type advantage, the Sea Weasel Pokémon was defeated by the Flame Pokémon’s Flare Blitz attack. Some time after this, Buizel was training with Ash for his match against Kenny and during the training, his SonicBoom deflected off a tree. Kenny’s Empoleon deflected it back at Buizel, causing the two to develop a rivalry. The trainers agreed to have their match be Buizel against Empoleon with the Sea Weasel Pokémon losing. In Ash and Paul’s battle in the Sinnoh League, Buizel took on Paul’s Gastrodon, first hitting it with Ice Aqua Jet, before finishing it with Ice Punch. The Sea Weasel Pokémon then took on Paul’s Drapion, which defeated him, despite his using his Counter Shield. After Ash decided to head to the Unova region, he left Buizel at Professor Oak’s lab.

Buizel is something of a cocky loner, often preferring to not play around with the other Pokémon. He is always eager to engage in battles, especially against strong opponents and is a very determined fighter, doing as much as he can to overcome challenges. Buizel is also quick to get in a fight with others, though he did mellow out as time went by, but still was quick to get in fights with Pokémon he didn’t know.

Buizel is a very strong Pokémon and being a Water Pokémon, he can easily swim and survive in water, using his tail like a propeller and having a floatation ring on his neck that he can inflate at will. Buizel’s moves include Aqua Jet, where he becomes surrounded with water as he flies through the air, striking his target, Water Gun, a jet of water Buizel fires from his mouth, SonicBoom, a shockwave he sends out from his tail, Water Pulse, where he sends out a large ball of water from his hands, and Ice Punch, where Buizel punches his opponent with his fist, charged with freezing energy. Buizel also has an ability called Swift Swim, where he can move much faster if its raining and has a number of improvised attacks. These included Ice Aqua Jet, where he uses freezing moves like Ice Beam on Aqua Jet to surround himself with sharp, icy armor, Aqua Pulse, where Buizel combines his Aqua Jet and Water Pulse, and Counter Shield, where he spins around on his back while using Water Gun, sending out a wave of water that can protect him and harm his opponents. 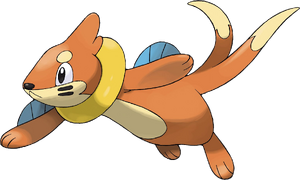 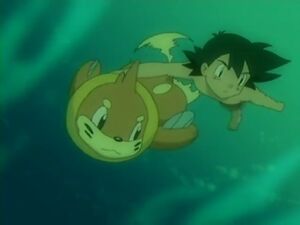 Ash Ketchum and Buizel under the water 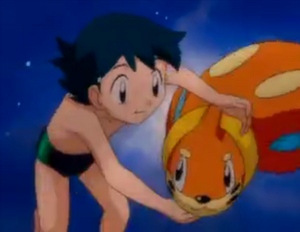 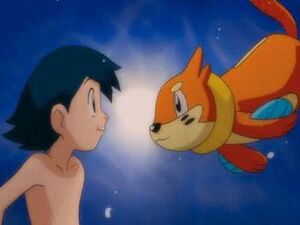 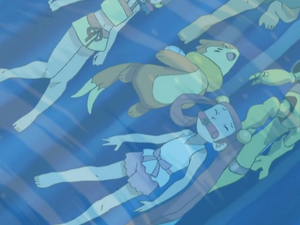 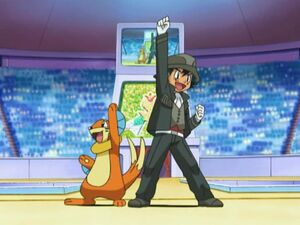