The Bull Shark is the main protagonist of the 2020 action role-playing shark video game, Maneater. Although the shark on the cover of the game looks like a Great White, it's actually an abnormally large female Bull Shark. The reason for this is because 2 out of 8 regions in Port Clovis are freshwater like Fawtick Bayou and Dead Horse Horse Lake, and the Bull Shark is the only shark that can swim in freshwater.

Starting out as a 1.1 m (3 ft) long pup and eventually growing into a megalodon measuring 9 m (30 ft) in length, the Bull Shark is truly, nature's vicious killing machine. As the shark grows up into teen, adulthood, elder, and Mega, it will require evolution sets and abilities as it progresses through the game. There are three complete evolution sets. They include BioElectric, Shadow, and Bone.

The Bio-Electric set will make the shark appear blue along with fins, tail, and head as well as teeth. The electric body will allow the Bull to evade with an electric jump as the electric tail sends an electric shockwave to stun enemies and do more boat damage. BioElectric Teeth can be used to give prey and other predators a mighty shock upon bitting them. The sets are unlocked after defeating Port Clovis' top 10 bounty hunters.

The Shadow Body set will make the shark appear dark purple with all of its parts. Shadow Teeth allows the shark to reheal itself as it grabs on to prey and eats them. The shadow head can also provide some head protection during combat, especially with stronger predators. The Shadow Tail will create a wave of black venom, covering any animal and blinding them for a few seconds. The sets are unlocked after discovering landmarks in specific regions which they're located in.

The Bone-set is the strongest form of the Bull Shark. Every bone part provides the shark with a lot of protection during combat and makes it feel very powerful and resilient. Bone teeth works very effectively on stronger predators and prey, allowing it to thrash them more easily and Bone Tail packs a bigger punch during combat with other sharks, orcas, and Sperm Whales. The sets are unlocked after beating the Apex Predators.

In order to unlock all the sets for the three evolutions, the Bull Sharks must complete the required objectives such as finding all the landmarks in the regions of Port Clovis, fight the top 10 Bounty Hunters, and fighting Apex Predators. Plus, the shark will need to reach a certain age in order to put on the sets and upgrade up to max.

Like all bull sharks, the female Bull Shark's personality is based mostly on aggression, since bull sharks not only tend to have very aggressive behavior but are also said to be the deadliest and most aggressive sharks in the sea. Mostly it's for survival at the moment of birth. With the combination of high aggressiveness and the instinct for survival. This made the female Bull Shark the perfect killing machine. It will eventually become the ultimate apex predator.

The Bull Shark starts its life as a 1.1 m (3.3 ft) long pup after her mother was caught by Scaly Pete and his son, Kyle Leblanc. After catching the mother, Scaly Pete cuts into its underbelly and discovers that the female is pregnant with a baby bull shark. Pete immediately uses his knife to create a scar on her back so when she grows up, Pete will spear her. Then in a moment of desperation, the pup immediately bites on Pete's right hand, shaking it violently off as she and the hand plummet into the waters of Fawtick Bayou, leaving Pete with one less hand. Once in the water, the shark eats Pete's hand as her journey from pup to mega begins.

In order for the Bull Shark to become a MEGA, she has to travel to all the regions surround Port Clovis, collecting Nutrient caches, finding landmarks, and fight Apex Predators to unlock different evolution sets. There are also 10 bounty hunters the shark can hunt to unlock new evolution parts. To lure the bounty hunters out, the shark must first raise her infamy level up by killing the incoming bounty hunters. With each Bounty Hunter killed, the harder it becomes to kill them. Many hunters will come with strong boats, better weapons, and more reinforcements. 7 out of the 8 regions of Port Clovis have an Apex Predator and they all provide more mutations for the shark, mostly the bone mutations. The first Apex Predators the Shark fights as it grows to Adult are, the Apex Barracuda (Level 10) in Dead Horse Lake, the Apex Mako (Level 15) in Golden Shores, Apex Alligator (Level 20) in Fawtick Bayou, and Apex Hammerhead (Level 21) in Sapphire Bay.

After taking out the first five Apex Predators, The Bull Shark will get its first chance to take on Scaly Pete as an adult. As the fight escalates, The Bull, using her pure shark skills (by removing her evolution mutation sets to fight Pete) smashes into the boat, Cajun Queen, with all of her might as well as tail whipping bombs. One the boat has taken enough damage, the shark will lunge on to the boat and try get at Scaly Pete and Kyle. As Scaly Pete tries to fight the shark, the Bull rips off his left leg while Kyle gets a jerry can to douce the shark and light it on fire. As the shark desperately tries to get back into the water, the boat's gasoline tank is exposed and the fire has touched it. Kyle tries to put the fire but the boat explodes, launching Pete into the air. This leaves him with a big burn mark on his left side as he clings to a piece of wreckage. He calls out for Kyle but he's nowhere to be seen. It's revealed that Kyle was killed in the explosion since he was close to the gas tank. As the shark swims by, Scaly Pete vows to get revenge for the death of his son. The explosion also leaves the shark with a blast wound on the left side of her head, resulting her to be half blind.

After the second encounter with Scaly Pete, the Bull Shark swims to Prosperity Sands where it continues its carnage to grow up into an elder. After gathering enough nutrient caches, discovering landmarks, and taking out the remaining bounty hunters, The Bull has now become an elder and trying out new maxed out evolutions preparing for the next challenges she faces. At max level 30, the shark has now become a MEGA Shark, measuring 9 m (30 ft) long and ready to tough out any creature that comes at it. This was put to the test while taking on the Apex Great White, which is at level 29. After a few good thrashes and hits, the Bull Shark has defeated the Great White and move on to complete objectives in the Caviar Keys.

In the Caviar Keys, as the now, MEGA Bull Shark continues her reign collecting caches, discovering its landmarks, and controlling the animal population. Caviar Keys is home to Orcas, which the Bull will have to learn to fight because The Apex Orca lives in the region at the Marine Mammal Park. The Shark gets the opportunity to learn how to fight orcas during one of the hunted target objects. With the objectives complete, The MEGA shark swims to the Marine Mammal Park where she battles against Mahana, the Apex Orca. At level 40, the Apex Orca is the 1st large Apex Predator and one of the hardest to fight. Its impossible for the Mega Shark to perform a Thrash Attack because any animal at higher level than MEGA (Level 30), can't be grabbed onto and thrashed around. Against all odds, the Mega Shark defeats large Orca and is rewarded with the Bone Head.

In The Gulf, The Bull Shark battles with the last and largest Apex Predator, the Apex Sperm Whale (which is a reference to Herman Melville's Moby Dick) and scores the Subliminal Evasion Organ Mutation. It will also deem the Bull Shark, the true Apex Predator of the sea. Meanwhile, Scaly Pete is making some adjustments to his father's World-War II Era PT 522 boat which he'll use to fight the shark. He's super angry after his son's death and vows to to catch the Shark once and for all.

After equipping with Hearty, Brute Muscles, and Reinforced Cartilage organs, as well as removing the mutation sets, The MEGA Bull Shark prepares to battle Pete and get revenge for her mother's death. Once in the Gulf, the final fight begins. As the shark batters the refurbished WW2 PT 22, she outswims torpedos and grabs them to launch back at the boat. Once the boat has taken full damage, Scaly Pete walks up to the bow to wait for the shark's appearance. With a mighty lunge, The MEGA shark lands on the boat and furiously bites on Pete to finish him off. After being thrown near the explosives, Pete grabs the remote and says his final words, "Laissez les bons temps rouler!". In slow motion followed by freeze screen, the MEGA shark goes in for the kill as Pete presses the button and the whole boat explodes, killing Pete.

As for the Bull Shark, she survived the explosion and has returned to the nearest Grotto to seek shelter after the battle. With her revenge complete, the shark can now explore more of Port Clovis, keep growing, and battling other marine animals. Then, one year later in 2021, the shark will begin a new adventure exploring extraterrestrial activity, acquiring new evolution mutations, grow even bigger, and face new Apex Predators in the upcoming DLC, Truth Quest. 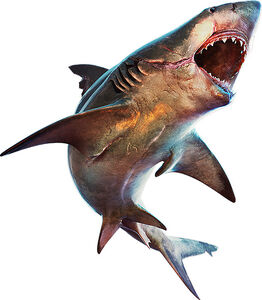 The Bull Shark as depicted in the game 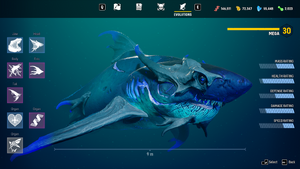 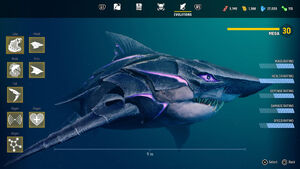 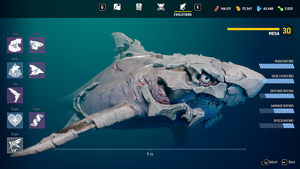 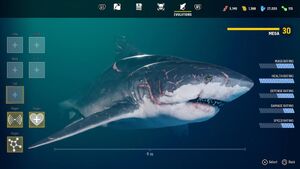 MEGA Shark without the Evolution Sets 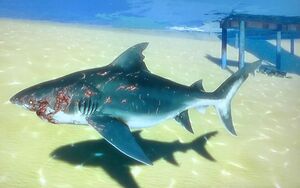 MEGA Shark's blast wound after the explosion of the Cajun Queen 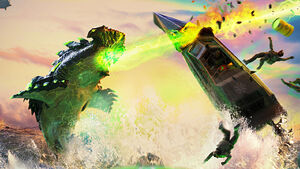 Bull Shark with the Alien Mutations for the upcoming Truth Quest DLC
Add a photo to this gallery
Retrieved from "https://hero.fandom.com/wiki/Bull_Shark_(Maneater)?oldid=2250266"
Community content is available under CC-BY-SA unless otherwise noted.