Bulla was the youngest child and only daughter of the Saiyan Prince Vegeta IV and the Human scientist Bulma Brief, thus making her a Human/Saiyan hybrid. Unlike her father Bulla didn't take an interest in martial arts or fighting despite her latent strength, instead finding joy in fashion and shopping.

While she is Vegeta's daughter, Bulla bears almost no physical resemblance to him and looks completely like her mother, though she does have many aspects of his personality. As a child (around age 6), she wears a white dress with orange polka dots and her hair is tied back in a knot. In Dragon Ball GT, she is 11-years-old (12 at the end) and her outward appearance is reminiscent of a teenager; she wears a red belly-baring top with exposed shoulders, red fingerless gloves that go up to her shoulders, a red mini skirt with a yellow belt buckle, and red high-heeled boots. and red headband She also has a red hairpiece. Her GT appearance makes her seem older and two grown men even flirt with her.

Bulla is close friends with two other daughters of the Z Fighters: Pan (the daughter of Gohan and Videl) and Marron (the daughter of Krillin and Android 18). Of the three girls, Bulla is the most assertive of her femininity, especially in comparison to Pan, who grows into somewhat of a tomboy in GT. Bulla's appearance in GT appears as a more youthful retooling of a common look of her mother while her personality is geared closer towards her father.

Bulla is usually cheerful, outgoing, and eager to please. Although she often appears by her mother's side, she is very fond of her father and the two have a close relationship. While Vegeta exhibits apprehension at having a daughter, he loves her very much and tends to spoil her, to the point where he makes no point in encouraging her to train as he did with her brother and prefers to let her make her own decisions. In fact, Bulla is the only person her father demonstrates not hesitating to answering to, often bending to her wishes when she is sad or angry (such as shaving his moustache when she tells him it makes him look like a "total geek" and taking her to go shopping to appease her).

Bulla is also known to have a fierce temper that is similar to both of her parents and she never backs down from an argument, which makes her more like her mother.

Bulla Brief was conceived by Vegeta IV (the prince of a near-extinct alien warrior race called the Saiyans) and his wife Bulma Brief (a genius Human scientist who belonged to the richest family on Earth). Towards the end of Bulma's term, Vegeta was needed to participate in the Tournament of Power — a multiversal martial arts contest that would decide the fate of their universe. However due to Bulla's impending birth, Vegeta refused to take part in the Tourmament of Power. The Angel Whis, who wanted Vegeta to participate, used his miraculous powers to warp the baby Bulla out of Bulma's womb, therefore forgoing the lengthy birthing process.

All of the couple's friends and family flocked around and celebrated the child's sudden birth. Everyone took turns holding the child, including her grandparents Dr. Brief and Panchy Brief. Bulla grew upset however when being held by Mr. Satan and Yamcha, much to Vegeta's annoyance. She was then held by her big brother Trunks and her father for the first time. Although Vegeta wanted to give her the Saiyan name "Eschalot," Bulma had already decided on "Bulla" which the child seemed to like.

In Age 784, Bulla attended the 28th World Martial Arts Tournament with her family to cheer on Vegeta, Trunks, and Pan who were all participating. Along with her mother and family friends, Bulla sat in a V.I.P. room provided by Mr. Satan which had a good view of the arena. Bulla was impressed when her father knocked out a rude opponent before the quarter-finals even began. During Pan's quarter-final match against Wild Tiger, Bulla cheered her on and warned her not to hurt him too badly. Ultimately, the Tournament was cancelled after Goku and his opponent Uub flew off together so that Goku could train him. 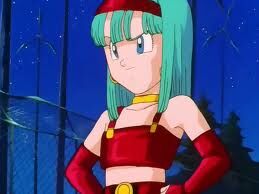