Bulletproof Jackson is the hero of the 2013 Zeno Mountain Farm film Bulletproof.

Bulletproof Jackson is the great-great grandfather of the main protagonist, Benny Jackson.

He was once a traveling magician who went by many names, beginning with Igor Floyd. Igor tried using magic tricks to make a living, but always failed.

One day, Bulletproof, then known as Earl Jackson, arrives in the town of Coal Junction and makes a plate of baked beans disappear towards some barmen. Unfortunately, that turns into a run-in with the evil Reaper Gang, a gang of thugs terrorizing Coal Junction. The meanest of the bunch, Big Ed, faces Earl, who squirts him with a flower, which in turn leads them into a showdown. Earl tries pulling out his gun, but the Reaper Gang shoot at him; fortunately, the bullets bounce off his belly (since he strapped the plate he ate the beans from) to his stomach) and he shoots at the Reaper Gang, scaring them off. That's when Earl becomes Bulletproof Jackson.

The town mayor tells Bulletproof how the Reaper Gang and their boss, Grimm Jim, took over the settlement and congratulates him for defeating them.

Bulletproof reluctantly accepts the mayor's honor. He puts away his tricks and falls in love with a lovely woman named Ashley, who welcomes him to the renovated saloon.

Suddenly, Grimm arrives with his henchman, Everett, and challenges Bulletproof to a card game, which Bulletproof unexpectedly wins. Enraged, Grimm kidnaps Ashley and Bulletproof realizes he has to face reality. He challenges Grimm to a duel and they face each other in a final showdown. The two of them take aim and fire; whereas Grimm's bullet penetrates Bulletproof's top hat, Bulletproof shoots Grimm in the forehead, killing him.

Ashley breaks out of Everett's grasp and runs to her hero. Bulletproof is hailed a legend and praised by the townsfolk. 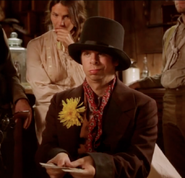 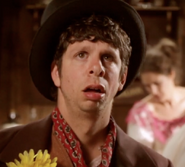 Retrieved from "https://hero.fandom.com/wiki/Bulletproof_Jackson?oldid=1714123"
Community content is available under CC-BY-SA unless otherwise noted.