Bumble Blast is a living, anthropomorphic bee hive in Skylanders: Swap Force. He is voiced by David Sobolov who also voiced Krypt King, Drax the Destroyer and Depth Charge.

Bumble Blast started life as a humble beehive in the Radiant Mountains, where for ages the bees made the most sweetest, most magical honey in all of Skylands. When Kaos heard about this "super honey", he wanted all of it for himself and soon launched an attack on the peaceful Bees. But when his minions arrived to plunder everything the bees had created, they were met by Bumble Blast. He alone had been home to the bees and considered himself their protector. Using the power of the magic honey, Bumble Blast valiantly battled the evil minions, who felt his powerful sting that day. Afterward, Bumble Blast roamed Skylands as a protector of nature, where he soon joined with the Skylanders. 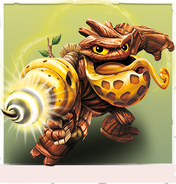 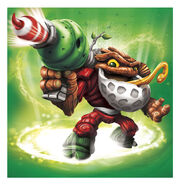