Saving the world from Villains.

She was voiced by Kimberly Brooks.

Karen can be very shy and nervous. When she has to do something, she becomes brave, heroic, and will not try, but do to save the day. Even though she is shy, that doesn't mean she doesn't know how to put bad guys in their place.

Zatanna first appeared where she leaves out of the car to go inside the school as she waves at her father, she starts a food fight with them and the entire school, until it got into a big mess and Barbara and the other 4 girls are busted by a principal and sent to detention. However, another new transfer student named Diana Prince, also known as Wonder Woman, was also sent to detention for cutting class on her first day. Kara doesn't believe that Diana is wonder woman, so they both started a fight, while Jessica tries to stop the fight with her power ring and Karen tries to fly away after shrinking herself with her gadget. Zatara then uses her magic to fix the detention room and stopped the fight before the principal arrived to check on them. Then, it turns out that Barbara's plan to get their attention worked when she witnesses the powers from the 5 girls and knew that they were superheroes. Diana was impressed that she has found Barbara as her "sister in arms". However, the other four girls are not interested in being superheroes, so Barbara makes a deal with them, Diana can train her and the others to become superheroes while they get to teach Diana the lessons of being a normal teenager. After a while, the girls agree with Barbara and the lesson begins.

After the girls helped Diana wear a casual outfit like a normal teenager, they met on a rooftop before training begins. Zatara shows Diana some magic tricks, although Diana didn't like the costume she was wearing right now before Zatanna changed it to a new costume with a cape.

Bumblebee appears when While the girls argue about their failures, Batgirl figured out that the robots and the virtual reality specs were all made by Lex Luthor. Unfortunately, the girls don't believe that it was Lex who is responsible for the destruction, and in the process, Karen, Zatara, Jessica, and Kara quit being superheroes and they all went their separate ways. As for Diana, she is caught by her mother, Queen Hippolyta of Themyscira, who reveals that Diana lied by escaping her home and disobeyed her mother, so her mother drags Diana by her ear to an amazon ship to go back to Themyscira. After going back home, Barbara becomes hopelessly sad, even after receiving a call from Harleen Quinzel in Gotham City, noticing that both Barbara and Harleen miss each other. However, Barbara is not giving up. She contacts the other girls in order to convince them to save Diana from being taken back to Themyscira, knowing that Diana was the one who made them not only as superheroes, but as friends as well.

Karen, along with her friends, then sneak onto the Amazon ship in order to free Diana, but they are all caught by the amazons and began to fight them while apologizing and convincing Diana to come back with them, Supergirl said Wonder Woman is the true greatest hero, and it warmed Diana's heart. After that, Diana stop feeling blue, stands up to her mother, telling her she passes the test and its law. Her mother accepts it, Diana leaves the ship with her friends squealing as they are headed to the carnival at the pier. However, they witness the robots from LexCorp about to demolish the carnival.

After that, the fight between the superhero girls and Lena begins. However, the girls still can't stop all of the robots from destroying the pier, so in order to stop the demolition, they realize they must shut down Lena's war suit from the inside. The girls then congratulate Bumblebee on her courage, Lena is taken away by her parents and Lex, who stares suspiciously at the girls. A crowd of spectators gathers around the girls and cheers for them. Three months later, Sweet Justice is reopened and the girls celebrate with their desserts. However, Barbara shows her friends something new below their table: The new secret base made especially for them. Their days as being superheroes have only just begun. 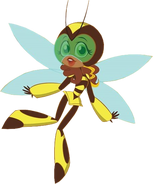 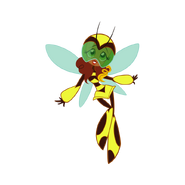 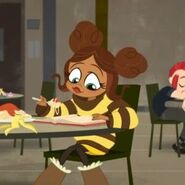