Bumblebee is the youngest, yellowest, and most energetic of the Autobots. A hyperactive wisecracker, Bumblebee is quite convinced he's the fastest—and coolest—thing on four wheels. He has a tendency to bite off more than he can chew, so it's a good thing he pals around with the massive Bulkhead. He does not take well to being called short, and his over-eager ways can get on Ratchet's nerves all too easily. Still, Bumblebee is good with people, as evidenced by his fast friendship with Sari Sumdac. He was also voiced by Bumper Robinson.

In this series Bumblebee and Very joking and mocking, he does not hold in place and do not know that even 10 minute silence as it can be in an episode where Prowl challenges him to not talk for 10 minutes about something he fails at first but wins at the end ... only because he was knocked out by Airachnid.

He and curious about technology and various human object as we often see Sari show him and explain to him the custom of Earth and even enjoy participating in certain party. (The birthday of Sari, Halloween, ect ...)

He is very complex of his small size maos manages to overcome its complexity thanks to these friends and his performance against an enemy made of acid its small size allowing him to return through a small space in the enemy's room force.

He is very stubborn and carefree and when he has an idea in his head good luck to take it away from him, he disobeys even the orders of Optimus sometimes because he thinks that Optimus is wrong and these put in great danger. His stubbornness and carelessness cost him a lot of reprimand by his team and a little argument at some occasion.

In spite of everything Bumblebee can be very nice and does not hesitate to come to the aid of what is needed to disobey and put in danger. He is very loyal to Optimus and the rest of the team he sees as his family

Bumblebee is the "kid" of the team, easily the youngest, and most immature of the Autobots. He’s over-eager, over-confident and constantly overcompensating for his diminutive stature. He’s a showoff and acts solely on impulse; he behaves like a rebellious teenager with a sarcastic, wise-cracking, attitude, disdain for authority and rarely considering the consequences. Fast-talking, wise-cracking, scheming and hyperactive, Bumblebee is not nearly as cool as he imagines himself to be. Then again, nobody could possibly be as cool as Bumblebee imagines himself to be. As far as his superhero status goes, Bumblebee naturally digs the spotlight and will do anything to have it shinning brightly, and exclusively on him. His big mouth, brash tone, and "bring it on" attitude always get him in way over his head.

He seems to share the appearances that matches that of his other incarnations from other communities, but the 4 wheels are on: 2 on the sides of each leg, and other 2 on the sides of his arms/shoulders each. Like most Autobots of the future, he has white pupils and blue scleras.

Back on Cybertron, his veichle mode was a Cybertronian Car, later when arriving to Earth, his Earth veichle mode is a yellow compact car (similar hybrids of Supermini and a modified Chevrolet Beat).

Bumblebee's main abilities are his Stingers, energy weapons built into both of his arms. Bumblebee can use these weapons to deliver a small charge to an enemy, or combine them into a single more powerful burst. In "TransWarped" Ratchet upgrades the Stingers to full military level firepower, giving Bumblebee increased firepower (This firepower was alluded to in "Autoboot Camp" where Bumblebee accidentally blew up a building with a poorly aimed shot, which at the time was uncharacteristically powerful. After being kicked out of the Elite Guard academy, Bumblebee's power must have been sealed). And like other future Autobots and Decepticons, he can also form bladed weapons or blasters from his hands.

Bumblebee's other main ability is his speed and agility - he is easily the fastest of the Autobots and among the most agile after Prowl. When Bumblebee needs even more speed, he can attach turbo boosters to his vehicle mode - these boosters can also act as rockets to propel him through the air, should he have a decent boost first (such as being thrown by Bulkhead).

On occasion, Bumblebee can use his wheels - located in his feet - to race along at high speed in robot mode. He can even lie on his back to use the wheels in his shoulders as well for even more speed, without having to transform!

Bumblebee is also adept at scouting missions, believe it or not.

According to Prowl, Bumblebee's greatest weapon is his obnoxious personality. 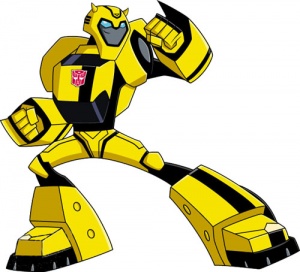 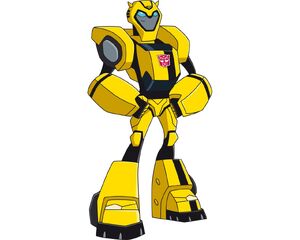 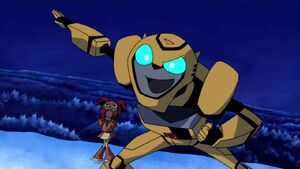 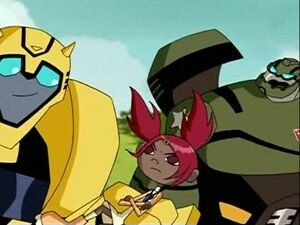 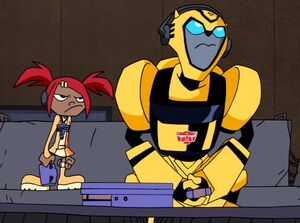 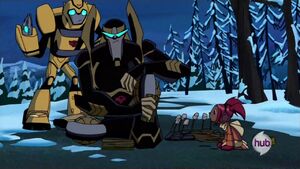 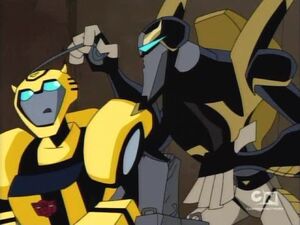 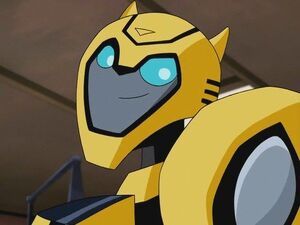 Retrieved from "https://hero.fandom.com/wiki/Bumblebee_(Transformers_Animated)?oldid=1855524"
Community content is available under CC-BY-SA unless otherwise noted.