Bungle is one of the main characters in the 1972-1992 children's TV series Rainbow along with Zippy, George and Geoffrey. He is a large brown bear who in the first series looked like a real bear but from the next series onwards his appearance resembled more of a teddy bear's as his old appearance scared children. 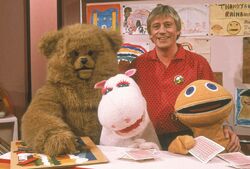 Bungle with his co-stars George, Geoffrey and Zippy.
Add a photo to this gallery
Retrieved from "https://hero.fandom.com/wiki/Bungle?oldid=1580225"
Community content is available under CC-BY-SA unless otherwise noted.