Bunny is the main protagonist of her only Powerpuff Girls episode "Twisted Sister."

She was voiced by the late Christine Cavanaugh.

She is a deformed Powerpuff Girl (being a giant one with a funny-looking ponytail, a hunched back, and a single tooth poking out), which is because instead of adding the right ingredients that were chosen to create the original Powerpuff Girls: Blossom, Bubbles and Buttercup, the three of them added artificial sweetener for sugar, twigs and dirt for spice, and all things each of them thought was nice, especially when Buttercup includes a punch in the concoction and then Blossom "accidentally" adds a beaker of Chemical X to it.

Then the new Powerpuff Girl (whom Bubbles names "Bunny") learns things from the three girls, especially about crime-fighting, but is confused as she is led to think that anyone with a gun is a bad guy, mistaking a police officer for one, as she releases the criminals and jails the police.

The three girls deny her membership and send her away. However, when they are under attack, Bunny redeems herself and fights the real bad guys. However, due to being unstable, she bursts to death, leaving nothing but a piece of her own dress, much to the sorrow of the girls and the narrator.

Bunny is one of three characters (of course, one is actually a group of three, so it's one of five) to die on the show, the others being Dick Hardly and the Rowdyruff Boys (though they get revived by HIM), but Bunny is the only good character to die.

The Powerpuff Girls each have a unique ingredient for her; sugar, spice, and everything nice. She has all of the Powerpuff Girls' powers, making her the strongest in a way. She was named after a rabbit, called "Bunny".

In the episode "Twisted Sister," the Girls created a fourth Powerpuff Girl named Bunny so that they could ease the burden of saving the town by themselves.

The Girls were too overworked for the day, so they sneak into the lab to create a fourth Powerpuff Girl.

Unlike her predecessors, she was created by the girls using imitation objects of those which gave the girls life (artificial sweetener instead of sugar, dirt and twigs instead of spices, what the girls considered to be "everything nice"), and Chemical X added "accidentally" along with the beaker containing it.

While she possessed the same powers as the girls and a similar color theme (having purple eyes and a purple dress to match), she has a hunch back, a stray tooth and a raggedy brown ponytail unlike the Powerpuff Girls.

She couldn't speak in complete English, so Bubbles gave her the name Bunny. Bunny wants to please her sisters, but her size and weight don't help.

However, despite of her physical and mental abnormality, they let Bunny join them in fighting crime.

When they started their usual day of crime-fighting, she thought that having a gun made a person a criminal and when she alone saw and alone confronted 2 cops taking in 2 crooks and brandishing guns, she threw the cops into jail, and started to release criminals, thinking they were good people.

As a result of her mishaps, the girls send Bunny away, only to be confronted by every convict Bunny released throughout the episode.

To redeem herself and save the girls, she defeats every criminal herself. However, due to instability, after defeating the criminals, Bunny dies in the explosion. 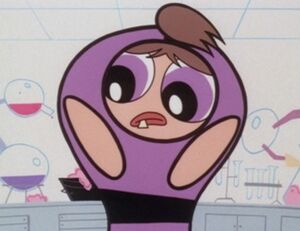 Retrieved from "https://hero.fandom.com/wiki/Bunny_(The_Powerpuff_Girls)?oldid=1669329"
Community content is available under CC-BY-SA unless otherwise noted.