Bunty is a supporting character in the 2000 film Chicken Run and it's upcoming 2022 sequel Chicken Run: Dawn of the Nugget. She is a grumpy, deep red Orbington chicken who doubts Ginger's plans of escape, because they never work.

She is voiced by Imelda Staunton, who's known for portraying Dolores Umbridge from Harry Potter and the Order of the Phoenix.

Bunty lives on Tweedy's Farm in 1950s Yorkshire with several other chickens. Their leader Ginger makes several attempts to help the chickens escape the farm as they will get killed if they do not lay eggs, but their attempts are always foiled by Mr. Tweedy. After one of the chickens named Edwina is killed by Mrs. Tweedy for not laying eggs, Ginger tries to come up with another plan to escape, but Bunty is skeptical due to the failure of the other attempts.

Later that night, an American circus rooster named Rocky Rhodes crash-lands on the farm and is tended to by Bunty and the other hens, but the farm's rooster Fowler is suspicious of him. Believing that Rocky can fly judging by a torn poster that arrived with him, Ginger convinces Rocky to help teach the chickens to fly in order to escape. Later, Bunty and the other chickens learn from Ginger that Mrs. Tweedy wants to turn them into pies.

On the day of their intended escape, Rocky has gone and Ginger finds the bottom half of the poster, showing that he could not fly at all and had been fired from a cannon. This causes Bunty and the others to lose hope and argue, but Ginger remembers Fowler talking about his time in the RAF and decides that the chickens should build a plane to escape. Ginger assigns two rats named Nick and Fletcher to steal tools from Mr. Tweedy in order to build the plane.

One night, Mr. Tweedy discovers that the chickens have his tools. Bunty and the other chickens attack Mr. Tweedy and tie him up and start to take off with Fowler as pilot. However, the ramp is knocked over by Mr. Tweedy, resulting in Ginger having to get out of the plane to put it back up with a returning Rocky. The plane then takes off, but Mrs. Tweedy tries to go after them by climbing the string of fairy lights hanging from the plane. However, Ginger tricks Mrs. Tweedy into cutting the fairy lights in half, sending Mrs. Tweedy back down to the pie machine.

Sometime later, Bunty, Ginger, Rocky and the other chickens, along with Nick and Fletcher, have made a new home on an island which they name Chikin Sanctuary.

Bunty is set to appear in the upcoming sequel which will be on Netflix in 2022.

Bunty is blunt, skeptical, sarcastic, lion-hearted, cynical, nihilistic, short-tempered, and possesses a very sardonic wit. Despite her pricklines, however, she always helps others in need. After so many failed attempts at escape, she had a very depressive outlook on life, but overcame this once she made it to the sanctuary.

She is a big, red burly welsummer hen, with short pink hair. She has brontosaurus legs, is obese, and wears a blue necklace. 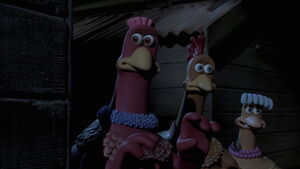 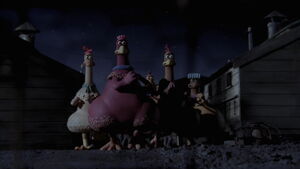 Bunty and her fellow chickens running to the fence. 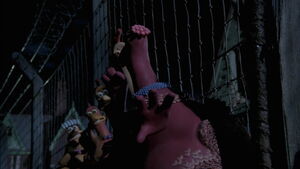 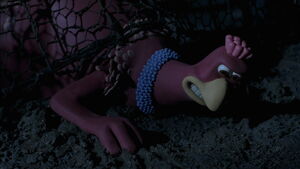 Bunty stuck in the fence. 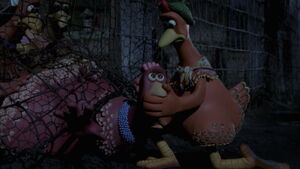 Bunty helped by her friends. 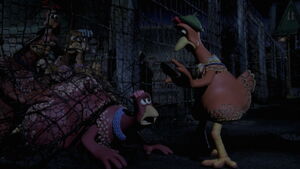 Bunty told by Ginger to get back behind the fence due to Mr. Tweedy coming. 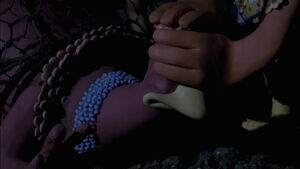 Bunty pushed back under the fence. 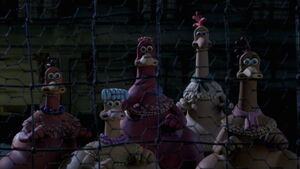 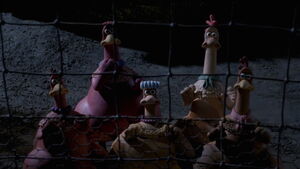 Bunty and her friends warned by Mr. Tweedy to never ever escape the farm. 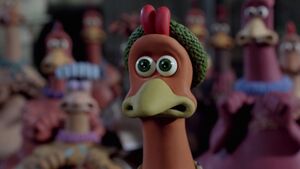