Help Endeavor in any way possible.

Moe Kamiji, or also known as Burnin', is a major character in the Shonen Jump anime/manga series My Hero Academia. She is one of the 30 Sidekicks of the infamous current #1 Pro Hero Endeavor and quite serves as his primary right-hand if so. She first appeared during the Endeavor Agency Arc and serves a role in the Paranormal Liberation War Arc.

She was voiced by Misato Kawauchi in the Japanese version, and by Lisa Ortiz in the English version.

Thought not much of her was explained, Moe is portrayed as a very enthusiastic, nearly optimistic, somewhat arrogant, and a fiery passion that has a burning personality, something that rivals Bakugo's hot-headed arrogance.

Despite that, She is shown to be very loyal to Endeavor and will assist in anyway to help him in action. 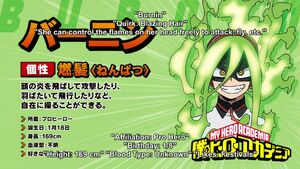 Burning in the eyecatch.