Save his theater (succeeded)

Buster Moon is a koala who serves as the main protagonist of the 2016 animated musical adventure film Sing. He is Meena's mentor.

He is voiced by Matthew McConaughey.

Filled with an unrelenting drive to succeed, Buster Moon is determined to save his struggling theatre despite dwindling audiences, bad reviews and accumulating debt. Well-intentioned, he does have a habit of stretching the truth, which usually widens the hole he's digging himself into. Nonetheless, he has an irresistible charm as his passion and optimism are utterly contagious.

When Buster's theater is falling on hard times, he hosts a singing competition to save it, despite the concerns of his best friend, Eddie Noodleman, the grandson of Nana Noodleman, Buster's favorite idol.

He gives out $1,000 for the prize and his assistant gives out fliers. Five singers compete for the prize - Mike, a conniving and greedy mouse, Ash, a punk porcupine trying to cope with her arrogant boyfriend; Johnny, a gorilla torn between the life of a gangster and following his heart; Rosita, a mother pig who gave up on her musical dreams to raise 25 piglets, and Meena, a teenage elephant with stage fright.

Buster wakes up in his bed

"Are you wearing a speedo, Eddie?"

Buster at his desk

Buster talking to Eddie Noodleman on his phone

Buster with a bucket 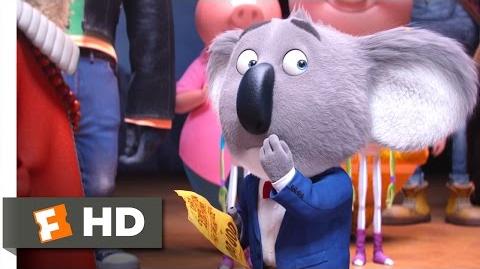 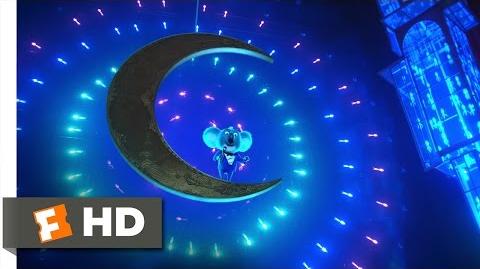 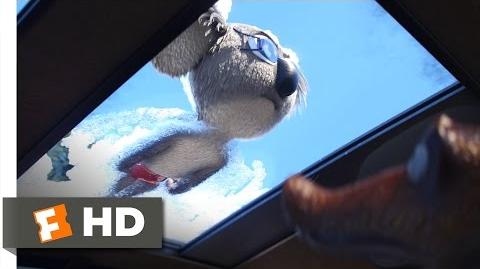 Retrieved from "https://hero.fandom.com/wiki/Buster_Moon?oldid=1755943"
Community content is available under CC-BY-SA unless otherwise noted.