Butch is an agent of D.O.G.S. and Lou's mentor. He is one of the main protagonists of Cats and Dogs series. He is the current mentor of Diggs.

Butch is a crabby, serious Anatolian Shepherd who just wants to retire. Butch was very disappointed that Lou told him he would be able to mentor Diggs, but the wise dog had enough smarts to show respect for the head of D.O.G.S. but he knew he was the boss of Diggs. Butch doubted Diggs for all his mistakes, from blowing up a used car dealership to letting the MacDougall twins get away. However, he no longer doubted Diggs after he proved himself a true agent by defeating Kitty Galore and blowing up the satellite broadcasting the "Call of the Wild".

Butch who reports Buddy's capture to his superiors.

Lou goes near an explosive trap set by the cats but Butch comes out and detonates it harmlessly. Butch then shows Lou the network that dog agents use, then takes him to meet some more agents: Peek is a Chinese Crested Dog who works in an underground tube and has surveillance and communications equipment and Sam who is an Old English Sheepdog. Having mistaken Lou for a trained dog agent, Butch raises his concerns to his superiors, but is told that there is no time to send a replacement. Lou is then briefed on the origins of the war between cats and dogs, which apparently dates all the way back to Ancient Egypt. Butch also mentions that Buddy managed to escape from the cats and retired from the spy business, living life in a condominium.

Butch and Lou manage to get into the house through the window, but Peek and Sam are trapped outside after Lou knocks the window prop away. Kennelkoff fires a series of boomerangs around the Brodys' house causing serious damage and which break several vases and knock a lamp over; the boomerangs also cause the curtain pole to break. Lou then distracts the Russian while Butch tries to disable the bomb, but Kennelkoff turns his attention on Butch and tries to kill him. Butch gets caught in a telephone wire, then Mrs Brody comes home looking for her cell phone and surprisingly does not notice her wrecked living room. Although he suspects that dogs can see in black and white, Butch manages to escape and disables the bomb, but Kennelkoff holds out a remote that will detonate the bomb and laughs until the lab door opens and hits him. Kennelkoff is then captured and interrogated. The agent tells the gang that they pumped a few things out of Kennelkoff's stomach, including a note written by Mr. Tinkles.

While trying to decipher Mr. Tinkles's location, the dogs are obviously unaware that the Brodys have been led into a trap and are kidnapped by the said cat. After receiving a video from the cat demanding Mr. Brody's research as a ransom, the dogs from around the world assemble at a meeting (like the United Nations General Assembly) run by the Mastiff. When the dogs are unable to give up the formula after the meeting of the world's dogs, Lou angrily confronts Butch for not helping him. Butch then explains that when his owner went to college, he left him with his grandmother and storms off, cutting off all of Lou's communications with Peek and the others, so Lou would not seek help to save his family.

Butch manages to find the depressed Lou and, along with Ivy, the two stage an ambush of Mr. Tinkles's factory where the latter plans to use mice to spread the now mass-produced allergy to dogs. While Butch, Ivy, Peek and Sam fight Tinkles's cat forces, Lou frees the Brodys and Calico (who was betrayed by Tinkles), revealing he can speak in the process. Lou defeats Tinkles and rescues Butch, but the claw of the excavator hits his head and a flocking tank, causing an explosion that destroys the factory. Butch manages to save Lou and he tells him he was right about everything, but the puppy is unresponsive and seems to be dead. After a few hurtful moments of sadness and sorrow, Lou suddenly awakens, and all rejoice. Lou decides to be a normal canine and not a secret agent yet, but one day he will be when he is a full-grown beagle. 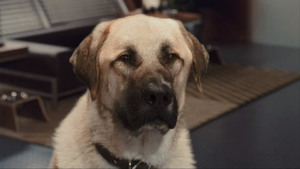