Dinosaur
Butch is the tritagonist of The Good Dinosaur. He is Arlo's mentor and the father of Nash & Ramsey.

He is voiced by Sam Elliott, who also voiced Ben in Barnyard, and Trusty in the 2019 live-action remake of Lady and the Tramp.

Butch is a tough, friendly Tyrannosaurus Rex who is the father of two young Tyrannosauruses, Nash and Ramsey.

Butch is a huge male Tyrannosaurus with brownish-yellow skin, scars on his face, and big sharp teeth.

After his kids, Nash and Ramsey, save Arlo and Spot from Thunderclap and his gang, Butch arrives to break up a fight between them by simply telling his son, Nash, to get out of his sister, Ramsey's bubble. Then, he turns to Arlo and tells him he's got no business being out here.

When Arlo says he's lost and he's looking for a river that will lead him back home on his farm, Butch states there are many rivers out there and asks which one he's following. Arlo tells him he's looking for the one that leads to Claw Tooth Mountain. Nash and Ramsey offer to take Arlo to a water hole somewhere south, where he may find someone with information on how to get back home. Nevertheless, Butch states that he and his family simply don't have time to "play baby-sitters" and that they are on their way to look for their lost herd of longhorns. However, Butch and his kids later agree to help Arlo when he offers to help them using Spot to track down their herd. At first, when they see Spot having supposedly led them all the way to a bug, which Spot later eats, they seem disappointed and Butch supposedly threatens Arlo that "if he's pullin' his leg, he's gonna eat his" until Spot calls them with a bark to show that he found the herd's tracks, a dead longhorn, and a feather belonging to the ones, in other words, "rustlers" as Butch refers to them as, that stole them in the first place.

When they finally find their herd and approach them quietly, Butch sends Arlo and Spot to get on a rock in the middle of the herd and scream real loud to attract the rustlers so that he and his kids could get them easily. After Arlo accomplishes that role (with Spot's help by biting him on the leg), the rustlers show up and are revealed to be velociraptors led by Bubbha. When they are about to attack them, Butch and his kids come to the rescue. When Butch gets overwhelmed by 2 raptors; Lurleane and Pervis, Arlo finally has the courage to overcome his fears and save Butch from harm. When they are about to retaliate, Butch grabs them by their tails and throws them far away, which also causes Bubbha and Earl to retreat in fear. Then, the T-Rexes, Arlo, and Spot let out a few roars over their victory on the raptors.

Later that night, the group share their stories on how they got their scars when they notice Arlo's scar on his right leg due to his last battle with the raptors around a campfire. Nash got into a fight with 15 Stegosaurus outlaws where one of them got his spike tail stuck in Nash's right leg and pulled it back out, and since then, he is unable to feel his toes (demonstrated by setting them on fire). Ramsey got her tail stuck between a rock and a hard place when a stampede of longhorns was coming right at her, so she chewed the tip of her tail off to get loose. But both of them enjoy hearing their father's story. Butch once walked for 5 days without water at 100 degrees in the shade until he saw a pretty pond, so, he bent down to take a drink when suddenly 3 crocs launched out of the water and one of them bit him on the face but Butch wasn't ready for dying that day, so, he bit one croc in half, tail-whipped the other, and finally, drowned the last one in his own blood. Nash wishes he could touch the croc's tooth, which his father has stuck in his gums as a souvenir, but refuses to allow him to touch it.

The next day, as they are herding along with Arlo's help too, Arlo sees Claw Tooth Mountain and the T-Rexes wish him luck on his journey. 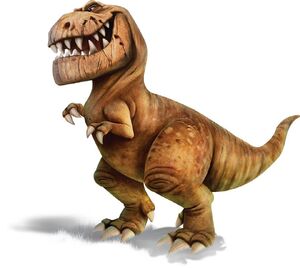